31 LISTS Doing What Actors Do Lists about actors and actresses and the characters they became, how they disappeared into roles, what they really look like, and more.

Greatest One-Hit Acting Wonders Just What Kind of Movie Is This? Actors in Old Age Makeup Actors vs. The Historical Figures They Played Same Character, Different Ages Never Recovered from Infamous Roles Wild Body Changes for Movie Roles Method Acting That Ruined Lives Actors Who Lied to Get the Part Old Actors Cast as Teenagers On Playing Real People Who Are Still Alive Actors Who Asked to Be Written Out of Franchises Aging Backwards Since the '90s Actors Who Are Always Creepy Pictured with the People They Played Landed Roles with No Experience Real Harm to Actors That Ended Up in the Movie Fictionalized Versions of Themselves In the Original, Then the Remake Their Decisions Totally Changed the Characters
Photo:  20th Century Fox / Warner Bros. / TriStar Pictures

While blockbuster movies and record-shattering television shows provide endless entertainment, they come with a terrible menace every viewer does their best to avoid: the dreaded spoiler. In the age of binge watching, immediate analysis, endless hot takes, and comments sections, it has become almost impossible to avoid spoilers. Every discussion board or conversation with a friend is a potential minefield in which you could have a shocking twist ruined for you.

Even if you take utmost care to avoid Facebook, friends, and reviews until you've seen a movie or caught up with a show, you might not be able to avoid spoilers revealed by actors. Plot points ruined by stars aren't done so in an intentionally malicious way. Instead, actors make honest mistakes, blunders that were meant as innocent remarks. But that doesn't stop them from being devastating to any fans who happen to catch them. After all, it's difficult enough to avoid having the end of your favorite show revealed by friends without having to also watch out for the stars themselves. Hopefully, other celebrities will learn from these actors who accidentally revealed spoilers.

Data-driven recommendations based on voting from over 40 million monthly visits to Ranker. Try the free app
1
Anne Hathaway Was Tricked Into Confirming Batman’s Fate In 'The Dark Knight Rises'

Anne Hathaway had an embarrassing moment on Late Night with David Letterman while promoting The Dark Knight Rises. Letterman, wily minx that he is, spontaneously announced Batman dies in the film in the middle of the interview. Hathaway proceeded to freeze up, then chastise him as she realized this was something of a spoiler for anyone who might be watching. When the talk show king revealed Bruce Wayne doesn't really die, it helped fans discover the twist ending before they had seen the film. 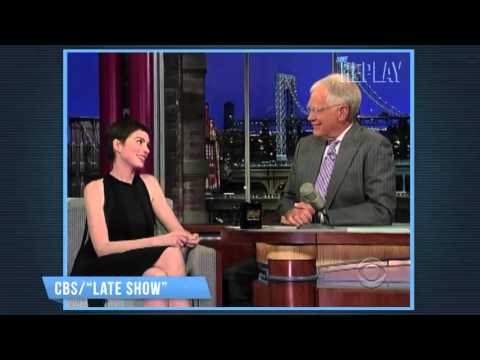 Arguably the biggest secret in the history of cinema was Darth Vader being Luke Skywalker’s father. The reveal took fans completely by surprise when The Empire Strikes Back released. Yet David Prowse, who physically portrayed Darth Vader (James Earl Jones provided his voice), spoiled the big surprise (maybe accidentally?) two years before the film even arrived in cinemas.

Speaking to fans at an event in Berkeley, California, the actor discussed the upcoming movie and how Luke would find out Vader was his "long lost father." The information was reported in a local newspaper in 1978, and didn't receive any additional press. What's more, as iO9 points out, Prowse may not have even known this information to be true, and was perhaps just being silly to appease the crowd; the script for Empire included nothing about Luke's parentage - these lines were allegedly added only for James Earl Jones when he recorded Darth Vader's lines. Which may not really make sense, because Luke has a strong reaction to this information. Unless maybe Mark Hamill's close ups were filmed much later?

Tyler Nelson was an extra on Indiana Jones and the Kingdom of the Crystal Skull, but was wiped from the movie after he spilled the beans on various key plot points in a local Oklahoma newspaper interview in Fall 2007, nearly eight months before the film hit theaters. The actor told reporters a number of plot points from the film, prompting a lawsuit from Lucasfilm that claimed he broke a non-disclosure agreement.

Some choice bits of information revealed by Nelson, as quoted from AdWeek:

"'Apparently, the Soviet Army was searching for a crucifix skull in the jungles of South America and Indiana Jones was searching, as well,' Tyler said.

The Russian Army tries blackmailing Indiana Jones to help them find the crystal skull by 'threatening to kill Karen, his old flame from the Lost Ark.'

'We took Indiana Jones hostage and managed to find the skull,' Tyler said...

'They were filming us outside of a tent dancing and then turned the camera inside the tent,' Tyler explained his scene. 'I saw Harrison Ford strapped in a chair being interrogated. I started to gather they were holding this big crystal-looking thing in the tent and heard someone mention a crucifix skull.'"

It probably wasn’t the wisest decision to annoy the likes of Steven Spielberg, George Lucas, and Harrison Ford. It seems like Tyler has had very little work in the industry as result of his gaffe. To quote a piece in Salon, "Steven Spielberg's spokesman is ominously quoted as saying: 'Who knows whether that particular person will ever work in this town again?'"

Was this a major spoiler?
4
Sylvester Stallone Tweeted The Final Page Of The 'Creed' Script

When Sylvester Stallone announced he was working on a Rocky spin-off in the form of Creed, fans were understandably excited. He may well have spoiled the ending for many viewers, though, by Tweeting a picture of the script months in advance of its premiere. Even more damaging was the fact that the page seemed to be from a particularly dramatic moment at the end of the script.

In Stallone's defense, the page was upside down and partially obscured in the photo, meaning you'd have to be looking for spoilers in order to find them, and if you're looking for them, you probably deserve things to be spoiled for you.

#151 of 275 The Most Trustworthy Celebrities in the World Fascinating Stories About Sylvester Stallone, Hollywood's Most Macho Starlisted on Republicans in Hollywood: Republican Celebrities List