Let's face it: Not everyone should be allowed to have a Twitter account. Sure, it a great place to express your feelings. But when the love of millions of fans - not to mention millions of dollars - depends on keeping a clean image, the social network becomes a minefield for bad decision-making. Just ask these famous athletes who said really stupid stuff on Twitter.

Athlete Twitter fails have been around since the first jock got his a smart phone. Nowadays, a lot of athletes have wised up and decided not to tweet out every single thought that comes to their head. Yet, despite examples form fellow athletes who've made major mistakes, some sports stars just never learn. For some, the backlash ends with ruffled feathers and lost fans. For others, the result of their dumb tweets has been total career implosion.

To be fair, not all of these athlete tweet fails were on purpose. Sometimes the stars were just too unfamiliar with the ins and outs of Twitter to know the difference between a tweet and a direct message. Whatever the motive, these risky tweets are usually deleted quickly... but not quickly enough. 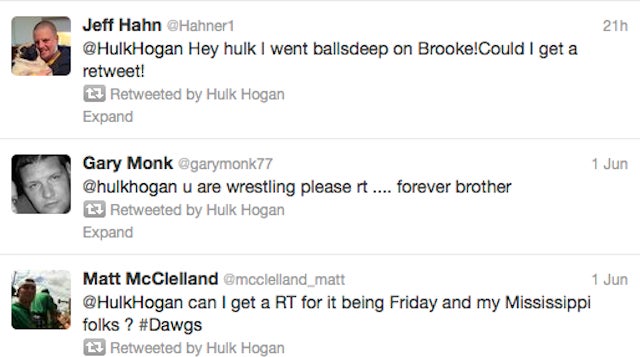 Hulk Hogan might not have been thinking straight on this one, or maybe he just forgot that his daughter's name was Brooke. Either way, this seemed like a particularly odd tweet to get a father's endorsement.

Is this cringeworthy?
3
When Rashard Mendenhall Defended Osama Bin Laden

If you're a 9/11 conspiracy theorist, you probably shouldn't share it with Twitter. Mendenhall's Twitter storm made its way into some pretty off-limits territory. Considerable backlash ensued, which even lost him some major endorsement deals.

Is this cringeworthy?
4
That Time Steve Johnson Called Out God on Twitter

It's probably not a great idea to start a Twitter feud with God, but that's exactly what Johnson did in a 2010 Tweet. (Although to be fair, the feud was pretty one-sided.) His tweet was the result of a dropped pass that could have won his team the game. Instead, he just lost respect of a lot of fans.

Celebrities Who Have Stretch Marks

The Best Quotes From Htichcock's 'The Birds'

The Best Luther Vandross Albums of All Time

The Best NBA Players from Massachusetts

The Best Songs With Heat in the Title

What to Watch If You Love 'Elementary'

celebrities from new mexico, worst diary of a wimpy kid book, jere burns tv shows, famous kings in history, songs with the word ice in them, the avengers cgi, Sabrina Carpenter dating, a song for you live, mark knopfler discography, belushi and candy