Every summer, the world’s most elite and powerful men meet in the woods north of San Francisco. They don’t talk about work. Instead, they perform Druid-like rituals, burning coffin effigies in reverence to the large redwoods that surround their camp. Nixon, Bush, Ford, Reagan, Rumsfeld, Kissinger, Rockefeller—all of these men have been members of the super-secretive Bohemian Club. And this isn’t some conspiracy theory: the Bohemian Club is very, very real. And so is their annual retreat at their private camp, Bohemian Grove. Here are some shocking Bohemian Grove stories—some documented, some rumored—that might just make you start believing in conspiracies.

Some background information - the Bohemian Club was founded in 1872 by reporters who wanted to build a community in which they could appreciate the arts. Artists and musicians were welcome, and, over time, the club relaxed its rules: anyone who appreciated the arts could join, even non-creatives. This opened the floodgates, because if there’s one thing rich people who fancy themselves sophisticates love, it’s private clubs.

Soon, the club was overrun by the wealthy elite, and the artists and journalists were pushed to the margins. As per club rules, at least ten percent of members must be artists, but realistically, only the most famous artists are allowed in. And, oh yeah: no women allowed.

One thing is very clear about Bohemian Grove: they don’t like outsiders. In 2008, a Vanity Fair reporter who infiltrated the camp was arrested for trespassing. It took an hour for members and security to suss out the fact that he didn’t belong. Impressive, since there were a few hundred men at the camp. You wouldn’t think it’d be too hard to blend into a crowd, right? But not this crowd. This crowd can tell who belongs and who doesn’t.

Despite the closed ranks, a few people have snuck into the club, and their testimonies give Bohemian Grove theories credence. Yet even those who got into the Bohemian Club weren't able to stay long enough to really integrate and figure out exactly what's happening in those woods. Until that happens, we’re left to speculate about a Bohemian Grove conspiracy. This list will take you through some theories about this exclusive camp. Get ready to put on your tinfoil hats.

Mark Evans writes of a man named Paul Bonacci, who claims he saw a snuff film of a child being killed among some large trees.

To quote Evans, “John DeCamp's book, The Franklin Cover-Up, includes Paul Bonacci's testimony about a snuff film of a child being murdered on July 26, 1984 in California in ‘an area that had big trees.’ At a meeting in Santa Rosa, DeCamp told a group that he had edited out Bonacci's references to an enormous, moss-covered owl and men in hooded red robes because he not know [sic] then about the owl at the Grove and thought it ‘too far fetched for people to believe.’

In the fall of 1992, Paul Bonacci was shown a black and white photo of the moss-covered owl at the Grove and quickly identified it as the site of the July 1984 snuff film described in DeCamp's book. Although this testimony has been available to law enforcement officials since mid-October 1992, no official investigation has been made.” 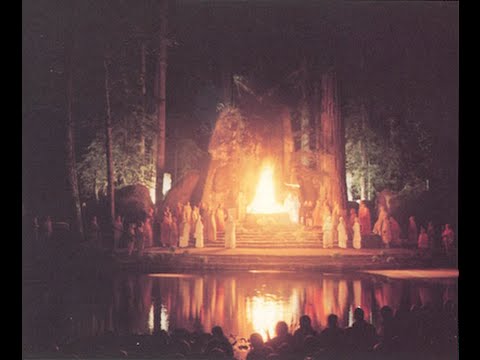 Is this creepy?
2
Human Sacrifice

"About the mid 1980s there were rumors of murders in remote parts of the property. A local police investigation went nowhere. State investigators on related criminal acts went nowhere. An observer and near victim has described the Bohemian Grove inner hideaways, the closed sanctum, even the decor at secret locations, places where no outsider goes (or servants according to our sources).

Apparently there is an UNDERGROUND lounge (sign spelled U.N.derground) a Dark Room, a Leather Room and a Necrophilia Room."

Is this creepy?
3
The Fate of the World Is Decided at the Bohemian Grove

A user named Forestlady posting on the Above Top Secret message board claims to have lived only four miles from Bohemian Grove. She says that some of her friends worked at the camp, and the father of one of her friends was a member.

She writes, “Why is the BG so feared? Because policy IS made there. That is where Ronald Reagan and Nixon made the deal that Nixon would run for prez in '72 and Reagan would run in '80, which is what happened. They have Lakeside Talks, given by well-known policymakers, CEO's and politicians about various policies. I have seen the topics discussed and oddly enough, 10 years later, these 'suggested' policies become actual policies in the real world. (nuclear rearming is a good example of this, we are now rearming again - that talk was given about 12 years ago or so.) Policy is made BEHIND CLOSED doors, without the input of the public. This is most undemocratic.”

Is this creepy?
4
The 40-Foot-Tall Owl May Symbolize Moloch

Moloch is an ancient Canaanite god associated with child sacrifice, who appears in the form of a massive bull with a human torso. In his video recording on the Cremation of Care ceremony, Alex Jones often refers to the giant owl as Moloch. But why?

In the ‘90s, Mark Evans wrote an article in which he compared worship of the owl to that of Moloch. Though the ceremony performed at Bohemian Grove and those performed in deference to Moloch differ in key ways, similarities between the two are striking. Both involve massive effigies of animal-gods and a sacrifice by fire.

In ancient times, children were sacrificed to Moloch so parents could gain the favor of the god. Some posit Moloch symbolized the terrifying power of nature, and the sacrifice of the child, the ultimate sacrifice, showed the lengths to which power-hungry people will go to rid themselves of powerlessness.