Celebs Who Have a Ton of Pets
Celebrity Recluses
Most Obnoxious Last Wills and Testaments
Celebrities Reported Missing
Stars Who Collect Bizarre Things
Gave Up Acting for Normal Jobs
Secret Ink and Hidden Piercings
Stars Who Quit Being Famous
Celebs Who Have Donated Organs
Stars Who Are Secret Artists
Weird Gifts Between Celebrity Pals
How Famous Actors Were Discovered
Famous People Who Are 9/11 Truthers
Killed by the Internet
Superstitious Celebrities
Bizarre Celeb Memorabilia
Famous People Who Are Asexual
Kept Normal Jobs After Fame
Celebs Who Insured Their Body Parts
What Happened to Your Accent?
Photo:  Matt Dames

This list contains information about celebrities who own fish tanks, loosely ranked by fame and popularity. Expensive and elaborate fish tanks are a status symbol among the top celebrities in the world. Famous actors, musicians, and athletes all own lavish aquariums. One famous pop singer even has a fish tank in the trunk of his car.

Who is the most famous person who has a fish tank? Madonna tops our list. She reportedly has an expensive luxury exotic fish tank in her home. Other famous female singers who own expensive fish tanks include Mariah Carey and Cher. Steven Spielberg has an aquarium in his office.

Several famous athletes have fish tanks. Chad Ochocinco has fish tanks around his bed and surrounding his televisions. Roy Williams showed off his impressive fish tank on an episode of MTV's Cribs. Kanye West had a 250-gallon aquarium at the end of his bathtub, before he married Kim Kardashian. Usher had an Acrylic Tank Manufacturing fish tank put in the trunk of his car for the MTV Movie Awards one year.

If you were a celebrity, what type of fish tank would you want in your home?

Tracy Morgan appeared on an episode of Animal Planet series Tanked looking for a new aquarium for his octopus in his lavish, New Jersey mansion.

Additionally, 30 Rock star Tracy Morgan has a custom pool table that features a fish tank which is home to two alligator gar, a Jaws-themed 2,700-gallon shark tank with six sharks, and a 20,000-gallon shark reef in his backyard that is home to eight sharks, along with several other massive fish tanks throughout the large house. 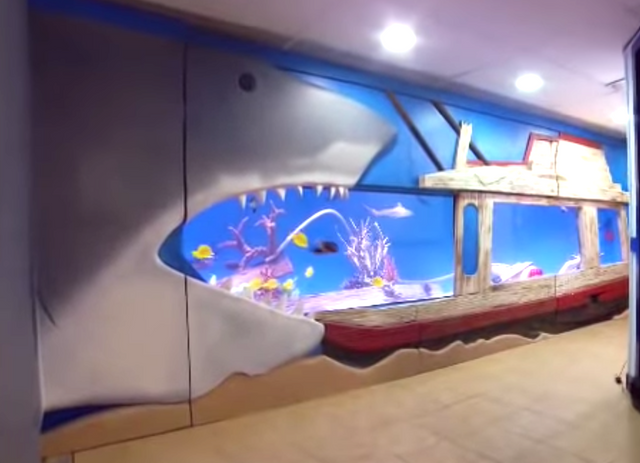 Shaquille O'Neal's home boasts multiple aquariums, and he, too, has appeared on Animal Planet's Tanked more than once. In the Egyption-themed room in his house, Shaq has a custom-built, triangle-shaped tank covered in hieroglyphics meant to represent the many nicknames he has garnered throughout his NBA career.

The tank weighs a massive 8,000 pounds, and holds 800 gallons of water, just for one fish, Shaq's grouper fish.

The NBA legend also has a life-sized, big rig installment in his Florida mansion which features one of his nicknames, "Diesel" on the front, with a fish tank featuring a Superman logo (another nickname of his) embedded in the grille of the truck. 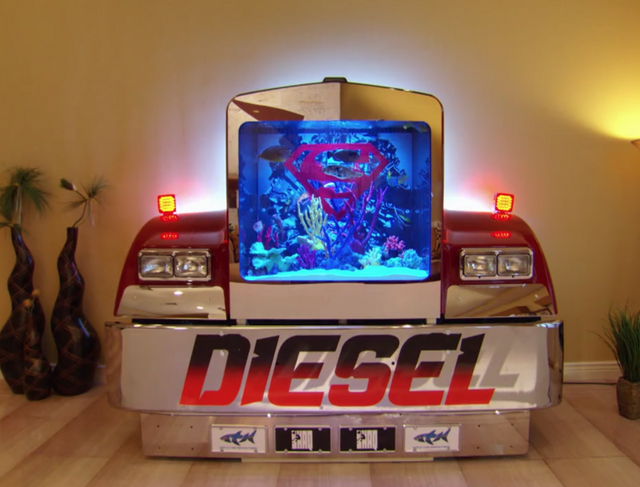 In his former bachelor pad in the Hollywood Hills, Kanye West had a 250-gallon aquarium at the end of his bathtub.

This property sold for $2.95 million in 2017, as Kanye West chose to focus on the Bel-Air and Hidden Hills properties he owns with wife Kim Karadashian West.

The Best Kanye West Albums of All-Time #516 of 2,042 The Greatest Musical Artists of All Time #16 of 255 The Greatest Rappers Of All Time

Ice-T and wife Coco Austin have a custom-made, 300-gallon reef fish tank by City Aquarium to house their sharks.

The Best Wrestlers Who Have Signed With AEW

Celebrities Who Live in Seattle

The Best Quotes About Revolutions And Revolutionaries

The Best Chicago Bears Tight Ends Of All Time