There are so many scary urban legends from Japan. The country has a rich history of ghost stories. Yūrei, similar to ghosts in Western culture, are the subject of many classic folk tales. But Japan doesn’t just have creepy folklore. There are plenty of modern Japanese urban legends that are so scary, you can’t even speak them aloud without becoming cursed.

This list includes many terrifying tales from Japan. There is, somehow, more than one story of a ghost haunting a toilet. There are also stories about secluded villages, murderous families, women with sharp objects - you name a terrifying thing, this list has it. Including dolls. What, you didn’t think you were going to be spared a scary doll story, did you? Enjoy these creepy urban legends, and try not to get too scared.

According to legend, if you don’t forget this story within a week, it will happen to you. So if you’re worried about being cursed, don’t read on.

One night, a boy had a dream about a school. It was a school he didn’t recognize, and as he wandered the halls, he became increasingly unsettled. The hallway he walked down was a continuous loop, always bringing him back to where he started. He climbed stairs only to find himself back on the first floor. The school was a maze he couldn’t figure out, and as he started to become scared, he heard the sound of footsteps behind him. The sound was faint and far away, but instinctively, he ran. The footsteps got closer and closer. He found an emergency exit with a glass lock box that held the key right next to it, but the glass had already been smashed. The key was missing. In its place, there was a note that said the key was in room 108.

The boy ran off in search of room 108, and when he found it, he shut the door behind him. There were no students, but there were backpacks hanging off every chair. He searched them all frantically, turning out the drawers of the teacher’s desk, but it was no use. The footsteps caught up with him. Now someone was pounding on the door. And as the boy cowered, the pounding just...stopped. The boy opened the door to the hallway, but quickly wished he hadn’t. The corridor was littered with dead children, their limbs scattered from end to end. He never woke up from his dream. And if you don’t forget this story in one week, you’ll have the same dream - and be resigned to the same fate.

If you ever find yourself alone on a quiet, foggy street after dark in Japan, you should probably beeline for the nearest populated place because you might just encounter Kuchisake-onna.

At first, you probably won’t be too upset about running into the woman who seemed to just appear out of thin air right in front of you. She’s gorgeous and demure, wearing a white surgical mask over her mouth. She asks you, “Am I beautiful?” You say yes, because she really is. She takes off her surgical mask for you. Her mouth has been slit from ear to ear. She asks, “How about now?” You:

A.) Say “No.” She slices your mouth from ear to ear with a pair of scissors, giving you a beautiful smile just like hers.

B.) Say “Yes.” She allows you to leave, and you think you’ve gotten off the hook. But when you arrive home, she appears again, killing you in your own doorway.

C.) Say “Maybe.” This confuses her. You run; she’s so flummoxed that she doesn’t give chase and you escape.

Do you think you would be composed enough to trick her? Or would you fall victim to a scissor-wielding maniac? 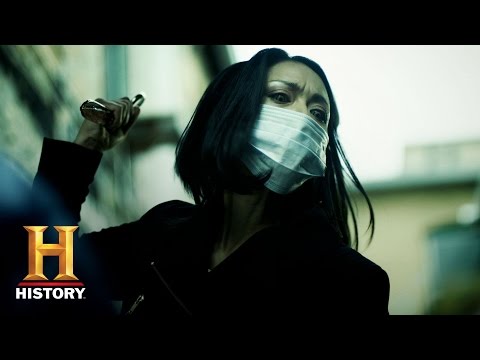 Is this creepy?
3
Teke Teke

This story starts with a tragedy: a girl accidentally pushed off the platform at a train station just as the train was pulling in was cut in half and died on impact. Some time later, a boy was walking home from school alone. He saw a girl through a window. She was leaning on the window sill with her elbows, looking outwards. When she saw the boy, she pushed herself through the open window.

There was nothing the boy could do except stand there, horrified. He had just seen a girl fall from a window, and on any other day, that probably would have been his low point. It might’ve even been the low point of his whole life if he got to live it. See, after the girl hit the ground, the boy realized something: she had no lower body. As he was trying to process this, the girl pushed herself up with her hands and started crawling towards the boy. She was at his feet before he had time to run. He didn’t even realize what she was carrying until the scythe was midway through his waist. As the two halves of his body fell to the ground, it was the sound that she made as she dragged herself toward him - teke, teke - that he heard last.

Is this creepy?
4
The Girl from the Gap

You know that small gap between your dresser and the wall? Or between your bed and the floor? Don’t look in there. Because if you see a pair of eyes staring back at you, you’re in trouble.

The first time you see the girl looking at you from a small gap, she’ll ask you if you want to play hide and seek. You don’t really have a choice. Even if you say no, you’re still locked into her game, which isn’t so much a game as it is an exercise in never letting your eyes lock on a gap ever again.

If you see her a second time, she’ll drag you down to hell.