19 LISTS Big Spending in the '90sA look at the decade-long heyday of brightly-colored, ridiculously loud, direct-to-children marketing and the many toys, foods, and products you begged your parents to buy you.
Crappy Toy Lines Made for Boys Once-Iconic, Now Bygone Brands The '90s Toys We Miss the Most Foods You'll Never Taste Again Cereals You Totally Forgot Things You Could Sell on eBay Games for Your Edutainment Toys Everyone Had for Some Reason Snacks You Can Still Get Today Computer Games You Played at School Worthless Collectibles Awful Clothes You Totally Wore Amazing Toy Commercials Trapper Keepers: Where Are They Now? The Toys Every '90s Girl Had Prizes from the Vending Machine Annoying Toys That Proved Your Parents Loved You Terrible Informercials What Happened to Surge Soda?
Photo:  via YouTube

The '90s were, overall, a great time for boys toy lines. Marvel and DC got their first figures since the heyday of Secret Wars and Super Powers, Star Wars returned, Ninja Turtles were everywhere, and McFarlane Toys upped the ante on sculpting, opening up a whole new niche for older collectors and even R-rated toys.

But you don't get good without making mistakes along the way, and the road to collector heaven was paved with terrible intentions and even worse executions. While some toys were getting better and better, others were so terrible that even though you bought them then, you'd love to go back in time and tell your past self to save that money. Dumb '90s toys for boys were a figuratively a dime a dozen, but much more expensive in a literal sense.

Frankly, there was just a whole lot of bullsh*t going on.
1
Lara Croft (Toy Biz)

When the first Tomb Raider game came out, heroine Lara Croft became an instant pop-culture superstar. She was everything everybody liked about Indiana Jones, but with breasts. And even in a game world that was years away from photo-realism, hackers came up with "nude codes."

Toy Biz tried to move quickly to capitalize on the love, and while the action figure they made sold quickly, it's a misshapen mess with an ugly caricature of a face and an awkward, bowlegged stance inherited from the Marvel figure whose parts she was reusing. Many, many toys of Lara have come since, but only this one actually made her unattractive.

Was this a ripoff?
2
Mortal Kombat

Everybody thought it was good  news when Hasbro announced they were doing Mortal Kombat figures. Surprise! They ended up being bullshit G.I. Joe repaints! This time around, though, at least they weren't branded as G.I. Joe, so that venerable toy could be spared one embarrassment in a decade otherwise full of them.

Kids bought them anyway, mostly just so their bullsh*t Street Fighter Joes could fight them. RIPOFF-ALITY!

Was this a ripoff?
3
G.I. Joe: Street Fighter II

Street Fighter II was a hot property in the '90s. Even as its graphics may not have been as eye-popping as rival Mortal Kombat, Capcom's constant upgrades with new characters and new moves kept the game fresh and complex. And in an era when arcade versions were still always superior to the home cartridge version, kids stocked up on quarters for their next bid at buttonmashing supremacy.

Toys should have been a no-brainer. Instead, the first Street Fighter II figures on U.S. shores were designed by someone seemingly without a brain. Repainted G.I. Joe bodies that sometimes bore no resemblance to the game designs combined with newly sculpted heads, and racks full of weapons that were in no way game accurate.

A second series actually included some original sculpts, and a few more were added for a tie-in with the Jean-Claude Van Damme movie. But compared to what fans got years later from companies like ReSaurus and SOTA, these really were a scam. Ha-BOO!-ken. 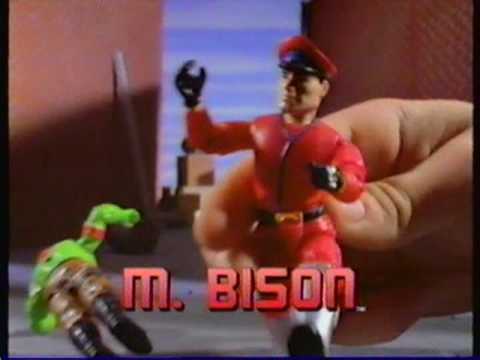 Was this a ripoff?
4
Sgt. Savage and His Screaming Eagles

Before Star Wars figures returned and made it okay for figures to be under four inches again, G.I. Joe was getting awfully lonely in the early '90s, as various Kenner movie lines and Toy Biz superheroes had bumped the "standard" scale up to around five inches.

Hasbro attempted to rebrand and resize the Joes to be compatible with other popular licenses, and came up with Sgt. Savage, a thinly veiled rip-off of Captain America who had been frozen in ice since World War II. His arch-enemy? An evil German scientist, still alive in the present day, who calls himself General Blitz.

Cap vs. Skull minus the cool costumes, supplanting the popular G.I. Joe characters? Kids said yo, no.

Was this a ripoff?
LOAD MORE
Filed Under: Polls 1990sToysNostalgiatop 10
more popular lists
poll 8k voters The Most Influential Contemporary Americans Mark Zuckerberg is rising to #17 Mythical Creatures 40k people have read Terrifying Monsters And Urban Myths From The Philippines Anime 182 people have voted on Why One-Punch Man Is The Perfect Anime For Anime Fans Who Are Bored Of Anime Teens 2.8k people have voted on The Best Teenage Makeup Brands