31 LISTS Dunder Mifflin, This Is Pam Lists about the beloved American adaptation of the BBC workplace comedy series "The Office," which ran on NBC from March 2005 until May 2013.

Fan Theories to Think About The Best Quotes From Our Guy Jim Memes Just for Fans and Colleagues Beloved Jim May Be a Scumbag Every Halloween Costume, Ranked Tales from Behind the Scenes Did Jim CHEAT on Poor Pam? The Very Best Creed Moments Dwight Schrute's Most Important Moments, Ranked Hot Take: Michael Is the Worst Favorite Characters The Dundies You Want to Win The Show's Best Running Jokes The Best Things Kelly Ever Said Things Michael Really Said Guest Stars You Forgot About What the Cast Thinks of the Show Kevin's Funniest Quotes The Episodes That Mattered Most Subtle Jokes You Totally Missed
Photo:  NBC

The best Dwight Schrute quotes chronicle the successful yet sometimes socially awkward life of the Dunder Mifflin Paper Company salesman, manager, assistant to the general manager, and assistant general manager, Dwight Kurt Schrute III. Portrayed by Rainn Wilson on the NBC series The Office, Dwight Schrute is one of the most popular characters on the comedy series, which also has starred the likes of Steve Carrell, John Krasinski, Jenna Fischer, B.J. Novak, and Ed Helms.

Modeled after Gareth Keenan of the original British version of The Office, Dwight Schrute thoroughly enjoys feeling superior to his co-workers and often expresses his feelings of his superiority. Between arguing over his title with Michael or simply expressing his place in the food chain (he's the lion), Dwight has few issues with self-esteem and the funny lines embody his confidence and gusto.

Despite his strong will, Dwight is often the victim of pranks and jokes from his office coworkers, especially desk-mate Jim Halpert and general manager Michael Scott. Dwight has little sense of humor but often inadvertently provides humor to his office-mates by being gullible and naive, such as when Jim tried to convince him that the actual Benjamin Franklin was in the office.

Whether he's talking about Schrute Farms, his favorite series Battlestar Galactica, or his own superhuman strength, a benefit of absorbing his own twin while in the womb, Dwight Schrute never fails to provide some of the most memorable, funniest quotes on The Office.

Data-driven recommendations based on voting from over 40 million monthly visits to Ranker. Try the free app
1
Weaponry Strategically Placed Around the Office
I keep various weaponry strategically placed around the office. I saved Jim's life with a can of pepper spray I had Velcroed under my desk. People say, oh it's dangerous to keep weapons in the home, or the workplace. Well I say, it's better to be hurt by someone you know, accidentally, than by a stranger, on purpose.

Is this the best?
2
Dwight vs. Dwight
Jim: OK, with all due respect to everyone here, I think the most worthy opponent of you is you.
Dwight: That is correct. Unless there happened to be measles present.
Jim: So let's just say that Dwight has come at you with the throat punch. Now how would you, Dwight, defend against it?
Dwight: Easy. Allow me to demonstrate. I am attacking myself with a throat punch. Here it comes. Block. Grasp wrist as such.
Jim: And what if he comes at you with the other hand, because he does have two.
Dwight: Good point. Second, throat punch, absorb the blow. Groin punch, hip block, elbow to the gut. Uh oh, up to the nose. No, you're not. Ow! Oh!
Jim: Oh my God, he's making you look like such a fool.
Dwight: He really is, but not for long. Ow! Instep, oh, not again. You let go, you let go. Oh, you're right, I can't hold on.
Jim: You two are so evenly matched I don't know how one of you is going to get the upper hand.
Dwight: The important thing to remember Jim... we always have what is called the element of surprise. 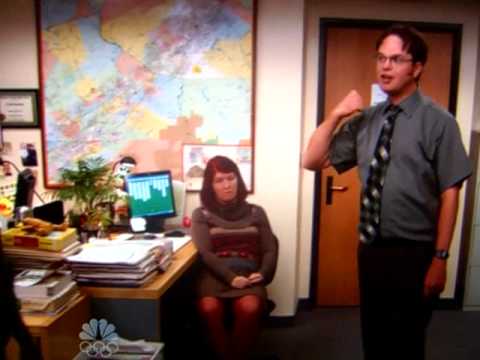 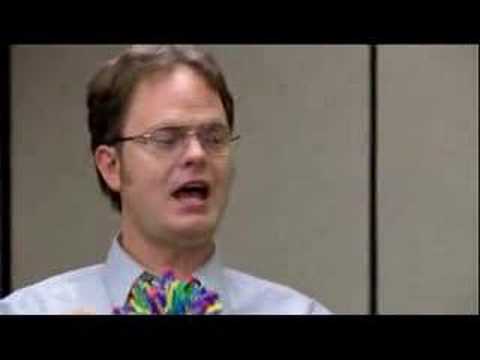 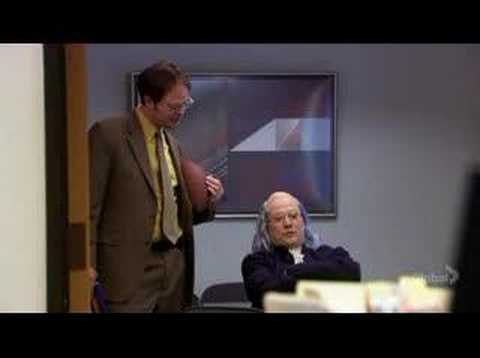 The Best Songs With Bridge in the Title

The Best Songs About Chocolate

Falling Free Bird: The Truth About The Infamous Lynyrd Skynyrd Plane Crash Is Stranger Than Fiction

The Best Songs About Michelles