30 LISTS We Will Never Be RoyalsLists about the strange and fascinating lives of rulers, royals, and royalty all around the world and throughout history.
Modern Pretenders to Royal Thrones Royal Movies That Fed You Lies Royals Who Had Defects Caused by Inbreeding History's Weirdest Royals All the Ghosts That Haunt British Royal Palaces When Royal Mothers Give Birth The Least Flattering Royal Portraits Fancy Rules of Royal Weddings The Dumbest Ways Royals Have Died The High Costs of a Royal Estate Stunning Royal Wedding Dresses What It Takes to Be Noble Where Royals Live Around the World Royals Who Terminated Relatives Some Monarchs Hold Real Power Weird Jobs in the Royal Staff Spouses Who Married into the Royal Family Crazy Real Titles of Nobility Beautiful Real Queens and Princesses Notable Sets of Royal Twins
Photo: Keystone/Getty Images

As long as money has existed, there have been those who have more than others. Nowhere is this wealth gap more apparent than in the purchase history of the richest royal families. Throughout history, royalty has been able to get away with spending exorbitant amounts of money on practically anything they want. The question is, exactly what do the royals spend their money on?

Wealthy royals live incredibly lavish lives, and some of what they buy seems – to us normal folk – unnecessarily extravagant. From gold-coated luxury cars to enormous estates to birthday parties literally held underwater, here are the most extravagant and unnecessary things modern 20th and 21st century royals have purchased with their sovereign salaries.

Collecting cars is apparently a favorite pastime of the royal and wealthy. The Sultan of Brunei, who has made his family worth over $20 billion, has an extensive car collection containing the most expensive vehicles. He even has custom-made Bentleys, Bugattis, Ferraris and Rolls Royces.

His Rolls Royce is even coated completely in 24k gold. 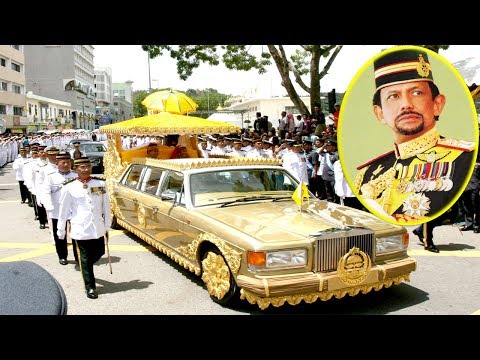 Nearly half of Swaziland's population lives on a single dollar a day, but that doesn't stop the royal family from spending their money lavishly. Known for frequently flaunting their wealth on social media, the Swazi royal family has hosted birthday parties underwater, maintained extremely profligate holidays, and displayed a particular penchant for gold leaf.

Their extravagant lifestyle, flagrantly boasted online, has angered the Swazi public, and an activist group called SwaziLeaks takes to social media to spread awareness about the exorbitant spending.

Is this completely unnecessary?
3
The Ruler Of Dubai Had The Most Expensive Royal Wedding

Royal weddings are bound to be extravagant, but the 1979 wedding of Dubai ruler Sheikh Mohammed Rashid al Maktoum and Hind Bint Maktoum takes the cake. the wedding cost a whopping $137 million — more than double Prince William and Kate Middleton's.

The wedding lasted a full week, and a brand new stadium capable of holding 20,000 people was built just for the lavish occasion. Five of those days were declared a public holiday, and the family chartered 34 private jets to transport their guests to the event.

Is this completely unnecessary?
4
The Dutch Royal Family Is The Most Expensive Of All Royal Families

The Dutch royal family may be small, but that doesn't mean they aren't expensive. In fact, they recently became the most expensive royal family in Western Europe, costing their taxpayers approximately $31 million a year. To put these numbers in perspective, they cost four times more than the Spanish royal family, even though the Netherlands are only a third of Spain's size, making the burden on the Dutch people that much heavier. They also cost more than the United Kingdom, thanks to a 16% budget cut for the House of Windsor.

Besides being expensive, they are also fairly wealthy, despite rumors – albeit vehemently denied – that they lost up to $100 million in Bernie Madoff's Ponzi scheme.

Is this completely unnecessary?
LOAD MORE
Filed Under: Polls HistoryRoyaltyBritishWealthyRoyal FamilyBritish MonarchyWeird History
more popular lists
Anime 167 voters The Best Anime Like Yu-Gi-Oh! Albums 5.2k people have read Pastor Troy Albums, Discography Songs 153 people have voted on The Best Songs with Round in the Title Historical Figures 406.2k people have read What The Most Famous Royals Looked Like When They Were Alive