38 LISTS Go See a Star WarEverything from A New Hope to The Rise of Skywalker, including trivia, behind the scenes photos, jokes, gifts, Baby Yoda, and all the rankings you can handle.
Easter Eggs You Never Noticed Jedi Who Turned to the Dark Side Plot Holes We Try to Ignore Every Type of Stormtrooper, Ranked Maybe Jedi Are the Real Villains The Best Insults in the Galaxy Your Favorite Characters, Ranked The Universe's Incredibly Dark Implications The New Canon: What to Know Easter Eggs You Missed in Solo References in Rogue One The Best Shots in the Whole Saga Saddest Ends in Star Wars Movies Changes That Shaped Episode IV One-Liners to Memorize Characters Who Deserve Spin-Offs Events from Even Before Episode I All the Video Games, Ranked Lingering Questions About Episode IX Rare Behind the Scenes Photos
Photo:  Walt Disney Studios

The Star Wars­ prequels have had their fair share of criticism over the years. However, despite this, the prequel trilogy does have its moments. While they may not be as entertaining or thought-provoking as the original films, each of the films contain some great scenes and imagery. In fact, there are probably a ton of things you never noticed in the Star Wars prequels (even if you have your own Star Wars fan theories).

The best parts of films like The Phantom Menace are not the action sequences, but the little hints that subtly suggest the things to come. The often clumsy dialogue in Attack of the Clones contains clues about the future of the characters, and Revenge of the Sith has some of the best hidden foreshadowing in Star Wars, with characters used extremely effectively as symbolism. The truth is, there are myriad amazing moments of foreshadowing in the Star Wars prequels, and they'll make you appreciate those films at least a bit more. Plus, with even more Star Wars sequels and installments coming out, maybe reading up on foreshadowing here can help you catch little hints and Easter eggs throughout new Star Wars films.

The prequel trilogy showed audiences some of Darth Sidious's other apprentices and trainees, besides Darth Vader. Each of the three movies has a particular focus on a specific antagonist: The Phantom Menace has Darth Maul, Attack of the Clones features Count Dooku, and Revenge of the Sith focuses on General Grievous.

These three characters perfectly foreshadowed the man Anakin Skywalker would become as Darth Vader. Darth Maul is a manifestation of evil and hatred, the forces that drive Anakin to the dark side. Meanwhile, Count Dooku is known for his split from the Jedi Order, symbolizing Anakin’s fall from his friends and mentors.

The final piece comes with Grievous, who hints at the final melding of man and machine that corrupts Anakin after his battle with Obi-Wan Kenobi.

Surprised you missed this?
2
The Way The Protagonists Are Chained Up On Geonosis Represents Anakin’s Conflicting Loyalties

While it can be argued the different beasts who attack each of the three main protagonists in Clone Wars metaphorically represent the struggles each character is set to go through, there is a far subtler image that forecasts the upcoming struggle of Anakin.

The Jedi Knight is chained up in between Padme and Obi-Wan on Geonosis, as the group faces imminent execution. This signifies the internal conflict Anakin will face, as he is caught in the middle of his love for Padme and his devotion to the Jedi. It manages to successfully show that he will have to choose between the two in the next movie.

Surprised you missed this?
3
A Scene In Revenge Of The Sith Subtly Reveals Anakin And Obi-Wan’s Friendship is Over

In the scene pictured above, Anakin and Obi-Wan talk before going their separate ways. Kenobi eventually ends the conversation by saying, “Goodbye, old friend.” This symbolically predicts this exchange will be the last time the two men will meet as friends. Anakin is gone the next time they come together, replaced by Darth Vader.

You might have easily missed the visual foreshadowing of Anakin standing in the dark shadows, while his mentor is bathed in bright light, a representation of their respective paths.

Surprised you missed this?
4
A Piece Of Music Warns About The Future Of The Clone Troopers

The Star Wars series has never been afraid to use music to hint at possible futures, and one piece from The Phantom Menace does just that (you can listen to it above). First played when the droid army invades Naboo, the same theme is used when the clone army is revealed on Kamino to Obi-Wan Kenobi.

This not only foreshadows the fact these clones could be used for evil purposes, but hints at the similarity between the two forces. After all, they are both mass produced armies used in a fake war to advance the aims of Emperor Palpatine, they just happen to be on opposing sides of the conflict. 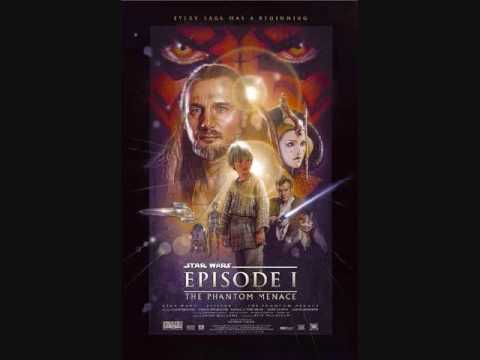