Futurama is one of the most beloved shows (animated or otherwise) you'll find on television. Not only was it hysterical, it was an exceptionally intelligent show that looked deep into our future (all the way to the year 3000) and painted a picture of reality that eventually came true. Seriously, in addition to having jokes you need to be a genius to understand, Futurama predicted the future. Sure, we haven't colonized Pluto, fought a malevolent robot Santa, or mastered interstellar travel yet, but there are several pieces of technology present in the show that found their way into our lives. And really, we all know that an evil Santa robot is just a matter of time.

The simple fact is, some Futurama jokes came true. The way humanity perceives the world, current events, and even video games all changed by the time Fry moved into the distant future... we just didn't realize how quickly those changes would come. While most people are aware of all the Simpsons jokes that predicted the future, they're probably not familiar with all of the insane Futurama predictions that really happened.

Drone mounted cameras help us with everything from behind the scenes pictures of movie productions to capturing nature in all of its beautiful majesty. It's almost hard to think about a world with drones.

But there was a time when the little flying robot cameras were merely a twinkle in the eye of the Futurama writing staff. You can see them floating around in press conferences starting in episodes going all the way back to 2000. Chances are you're only going to see more of them as time goes on, so enjoy floor-bound cameras while you still can.

Is this uncanny?
2
Mundane Virtual Reality

Early on in the series, Futurama accurately predicted virtual reality tech. While not the first form of media (or even TV series) to play with the idea of VR, Futurama was the only one to get it right. When the Planet Express gang visit an amusement park on the moon, Amy straps on a VR headset. The joke is, of course, they use the astounding technology for super simple activities, like skeeball.

This may have sounded laughable back then, but the Oculus Rift virtual reality games that we have now make the Futurama writers look downright prescient. Take Job Simulator, for instance. It's a "game" where you pretend to have a job. That's pretty much it. So, not only did Futurama totally call VR, they nailed exactly the kinds of things it would be used for. 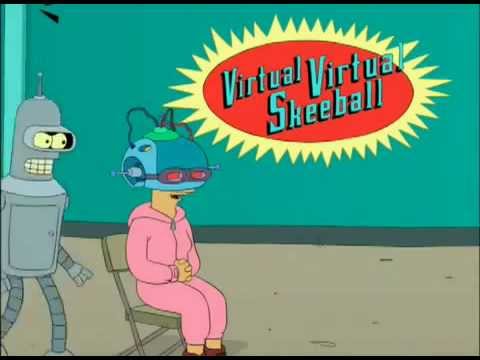 Is this uncanny?
3
NASA Asteroid Response

It's been depicted in a few movies now, but one of Futurama's earliest episodes, "A Piece of Garbage," depicted an end of the world scenario featuring an asteroid hitting Earth. Because it's Futurama, instead of sending space shuttles to destroy it they send another asteroid into space (made completely out of garbage) in hopes that they'll collide.

The theory was, the original asteroid would be knocked off course and the Earth would be saved. The crazy thing is, NASA actually had a similar plan to combat a potential asteroid that threatened to hit the planet in 2013. Their projectile, however, probably wouldn't be made out of garbage.

Is this uncanny?
4
The Ebola Epidemic

Remember the Ebola outbreak that had everyone in America freaking out for a while? It seemed inevitable that there would be another Ebola scare, to be fair, but the extent of the last outbreak had a lot of people worried.

Well... Futurama kinda called that. In fact, in the episode "A Piece of Garbage," there's an entire planet called Ebola 9 where people are infected with the disease. Clearly there have been some mutations over the years, and intergalactic civilization was forced to put all the infected on the same planet like a leper colony. Hopefully we won’t suffer the same fate here.