23 LISTS Weird History Around the WorldAs long as human beings have been alive, we have been doing bizarre things that barely make sense. Here are lists of a few thousand of them.
History's Biggest Mysteries and Best Kept Secrets Food Tech That Changed Everything The Meanings of the World's Most Peculiar Flags The Most Bizarre Governments in World History Very Important Artifacts That Are Still Missing! Weddings with Disastrous Endings Arsenic, History's Toxic Tool Fascinating Artifacts Oldest Businesses Still Working Today The So-Called 'General Crisis' Hidden Treasure Waiting to Be Found Events That Took Places in Bars Justified Cases of Mass Paranoia Monuments Taken Down in Disgrace Britain Before Christianity Real Holidays That Celebrate Genocides Famous Mystics Who Changed the World Weird Holidays Gone But Not Forgotten What Cat Worship Was Really Like Weird Ways Leaders Were Elected
Photo: Wikimedia Commons

Items made of spider silk have a strange but alluring appeal around the world despite, or perhaps because of, the fact that many people around the world live in terror of the eight-legged creatures. Spider silk clothing is considered the rarest type of garment, since thread made of spider silk is extremely difficult to make. Certain spiders, like the gorgeous Golden Orb Weaver whose silk is frequently used, sadly don't thrive outside of the wild, and are hard to domesticate and control.

Despite its fragility, uses of spider silk throughout history are both extensive and impressive. Some cultures have been very creative in their uses of the humble spider web, creating everything from fishing lures to violin strings to bandages to canvases for paint. Items made from spider webs have seen use in the fields of science, medicine, spirituality, and art.

Although these fascinating items from the past may have been way ahead of their time, spiderweb silk might yet be the "textile of the future." Items using spider silk are high-craft rarities and not mainstream, but fascinating uses of spiderwebs are creeping into the modern era, with scientific research utilizing more gossamer technology. There's even talk of spider-based bulletproof clothing, and more on the horizon.

They may not have known the science behind what they were doing, but ancient Greeks and Romans learned very early on that spiderwebs make great bandages. There are three key reasons why: first, spider webs contain high amounts of vitamin K, which helps blood to clot. This meant that the webs would would stop bleeding faster. In addition, the webs of most spiders have antibacterial and antifungal properties, which helps with the healing process by preventing infection. Finally, spiderwebs will mesh with human skin as it heals, which also speeds up the healing process. Of course, an important caviat to all this is that it's important to use only the webs from non-poisonous spiders, particularly against open wounds. But with all of those benefits, it isn't surprising that people are looking to incorporate spider webs into more modern medical technology.

Agree or disagree?
2
A Golden Silk Cape That Took More Than One Million Spiders To Produce

In 2009, two men created the largest known piece of fabric made of spider silk from Gold Orb Weavers. It took Simon Peers, an art history and textile expert, and his business partner Nicholas Godley more than one million spiders and half a decade to complete their mission. No spiders were killed in the cape-making process: instead, when the spiders had spun all the silk they had, they were released back into the wild. Spiders start producing silk again after about one week. The final product, an 11 by 4 foot piece of cloth, is considered to be the rarest type of fabric in the world.

Agree or disagree?
3
Spiderweb Lures To Catch Unique Fish In The Solomon Islands

A traditional method of fishing in the Solomon Islands, off the East coast of Papua New Guinea, involves using a lure made of spiderwebs attached to a kite string. The fish they're looking for is a Needlefish, whose mouth and teeth are actually too small for a traditional fishing lure. The solution is a clump of spiderweb, hung from a kite to create a bobbing motion on the water. When the fish takes the bait, its mouth is stuck in the web and the fisherman can pull it in. 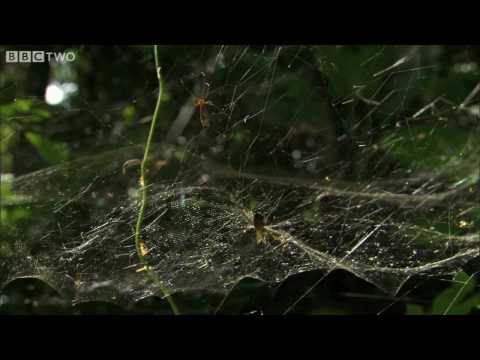 In 1800s England, it was common practice to use spider silk as crosshairs for guns, telescopes, and other instruments of scientific observation. The threads were extremely thin, so they didn't get in the way of what the scientist was trying to observe. They also provided very accurate measurements, and could be used to form grids.