31 LISTS Horror Buff StuffAre you the "horror person" on your trivia team? Meet your new secret weapon: lists about everything even you don't know about scary movies.
Scenes That Were Cut for Being Too Disturbing Fan Theories to Think About Easter Eggs You Didn't Notice Are They Really Psychopaths? Confusing Endings No One Understands Don't Think About These Plot Holes Too Much How Directors Get You Scared Plot Holes We All Ignore Little Details That Gave Away the Ending Horror Films That Were Banned These Sets Were Just as Scary as the Movies The True Stories They're Based On Films That Got People in Big Trouble What You Missed in the Background Famous Actors in Old B-Movies Unforgivably Pretentious Underrated Last Girls Standing Movies Based On Kids' Nightmares These Movies Got Way Too Much Attention The Early Days of Every Tired Horror Trope
Photo:  Ready or Not / Fox Searchlight

Horror movies aren’t known for having happy endings. They’re meant to be unsettling, and to leave viewers rattled long after they step out of the darkness of the theater. However, there are a handful of horror films that almost had darker endings than what made the final cut.

Alternate endings in horror films usually come about when an audience finds the original ending to be too bleak, or when an ending is so shocking that it has to dialed back in order to leave viewers with some semblance of sanity. Many horror movie alternate endings are either reshot in response to a super depressed test audience, or are filmed during the original production, then cut after the filmmakers realized that their initial, unforgiving vision was too heavy.

In the end of the 2017 prequel to The Texas Chainsaw Massacre, Leatherface (Sam Strike) finally makes his first mask. He catches a woman named Elizabeth (Vanessa Grasse) and slays her. In the theatrical release, it ends there, but in the alternate ending, he puts her on a hook, similarly to a gut-wrenching moment from the original film.

After that, he slices off the bottom of her face while she's still alive. Is anyone even surprised this had to be cut?

Hostel follows Paxton (Jay Hernandez) as he and his friends vacation in Slovakia. After a night of partying, they're snatched and locked up in a secret prison where wealthy men get to torment them. Paxton escapes the prison (and offs a bunch of people on his way out) and encounters the man responsible for his pain in a train bathroom. The film ends with him ending the man.

The original ending plays out similarly, except Paxton sees the man with his young daughter. He takes the daughter, suggesting she’s going to suffer an awful fate as well. 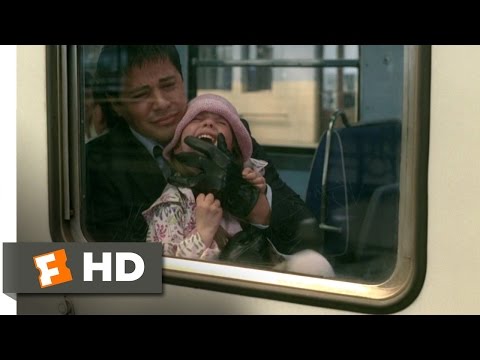 The Butterfly Effect is a trippy enough movie with the various realities it presents as Evan (Ashton Kutcher) rewrites his history over and over. There were a total of four endings created for the film, and this one that got cut is definitely the darkest. Released as the director's cut, this ending shows Evan going back to the womb to end himself in vitro.

The Descent is about a group of female spelunkers who get lost in a cave and have to outrun a group of blood-thirsty creatures. The baddies pick the women off one by one until only Sarah (Shauna Macdonald) escapes. She makes it to a car and drives away, haunted by what she's just experienced.

In the international version of the film, Sarah wakes up in the cave after she seemingly makes it to the car. As the camera pulls out, it reveals that she's all alone in the cave, surrounded by crawlers.