6 LISTS Rugrats
Theory: All the Rugrats Are Dead Creepy Moments You Blocked Out Fun Rugrats Facts You Didn't Know Angelica's Worst Deeds The Greatest Episodes, Ranked Favorite Characters
Photo: Nickelodeon
The Rugrats was one of, if not the most popular kids cartoon during the 1990s. While the series is known for having plenty of moments that terrified kids, it also had its fair share of inappropriate Rugrats jokes. Back then, finding subtle adult jokes in cartoons wasn’t uncommon, but for some reason, dirty Rugrats jokes seem to have flown under the radar – until now. This list includes some of the adult jokes from the show that probably went straight over your head at the time. Now that you're older, you can finally understand what your parents were laughing about as you watched Tommy, Chuckie, and the gang go on their adventures.
1
The Male Bonding Gesture
Phil and Lil’s dad, Howard, goes away on a trip, and Tommy’s dad explains that he’s doing some “male bonding.” As he says it, he pushes two fingers together to suggest some homosexual you-know-what.

Did you miss this the first time?
2
The Blocks
It’s not so much a dirty joke, but it’s certainly an intentional move. These tumbling blocks on Rugrats clearly spell out the word “GAY.”

Did you miss this the first time?
3
Angelica Draws Something Phallic on Susie’s Art
On season nine’s “Pre-School Daze,” Angelica draws what appears to be a penis on Susie’s artwork, and it’s discovered by the teacher who is obviously appalled. 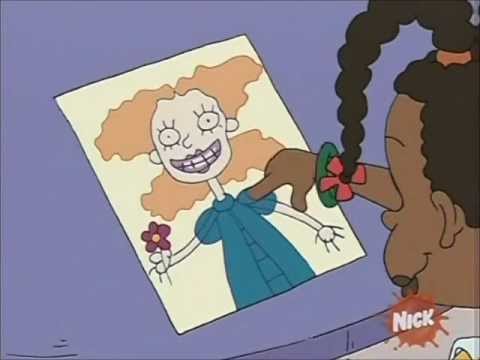 Did you miss this the first time?
4
Grandpa Calls Dr. Kevorkian
On the episode “Home Movies,” we see Grandpa Boris give Dr. Kevorkian a ring. For those who aren’t familiar, Kevorkian was publicly known for physician-assisted suicide.