38 LISTS Film Buff Stuff Lists for every cinephile and "movie guy" on your trivia team.

There are people who race out of the theater as soon as the end credits start, and there are those that stay and watch to the end; if you're a regular credits-skipper, this list might inspire you to stick around. Genius jokes hidden in movie credits are just waiting to be unearthed - but you have to know where to look for them. The secret things in movie credits are typically references to events or dialogue from the film, but in some instances, the filmmaker has included an allusion to another work entirely, or they have had a little fun at the expense of crew members or even their own families. The funny movie credit jokes on this list prove that even though the end credits may seem like endless words scrolling off the screen, there's no reason for the entertainment to end.

Enjoy these jokes that play after movies, and be on the lookout next time you're sitting in a darkened theater.

1
During The Scream Credits, Wes Craven Got Revenge Against An Unhelpful School Board

Initially, the Santa Rosa School Board had given director Wes Craven permission to fill Scream on their property. But before filming began, the board reneged on their promise, sending the filmmaker scrambling to find a new location at the last minute. Craven got his revenge, though.

In the end credits of Scream, he gives "no thanks whatsoever to the Santa Rosa City School District Governing Board." Take that, school board bureaucrats.

#12 of 799 The Best Horror Movies Of All Time #381 of 803 The Greatest Chick Flicks Ever Made According To This Theory, Dewey Is The Serial Killer Mastermind In 'Scream'

2
Airplane II: The Sequel Had Fun With The Technical Titles Of Some Crewmember Jobs

The Airplane movies spoofed disaster epics in a major way, and the ribbing didn't stop after the final scene. The credits of Airplane II: The Sequel contain some funny gags stemming from the bizarrely-named crew member job titles. For instance, after the best boy is listed, there is a "worst boy" credit, given to none other than Adolf Hitler.

When the gaffer credit scrolls, there is a question in parenthesis beside it: "What's a gaffer?" (Sidebar: What IS a gaffer?)

3
The Credits Of Naked Gun 33 1/3: The Final Insult Are Almost As Funny As The Movie Itself

There is no shortage of laughs in Naked Gun 33 1/3: The Final Insult. From Anna Nicole Smith's miles-long legs to Mary Lou Retton winning an Oscar and literally flipping her way to the stage, this is one seriously riotous movie. The filmmakers make sure the laughs continue throughout the credits.

Among the gems: an appeal for audience members to stay seated and keep watching; an "announcement" for the owner of a certain vehicle parked in the parking lot; and Tammy Faye Bakker (who doesn't appear in the movie) gets a credit for "Too Much Make-Up."

4
A Monsters, Inc. Character Swims By In The Finding Nemo Credits

One of the great joys of Pixar movies is that there are jokes for the adults as well as jokes for the kiddies. But in the credits of Finding Nemo, there is one brief, funny reference to another Pixar film that any astute viewer can pick up. Towards the end of the credits, a tiny little character swims across the screen, and fans of Monsters, Inc. will recognize him immediately.

It's Mike Wazowski, decked out in a snorkel and flippers. 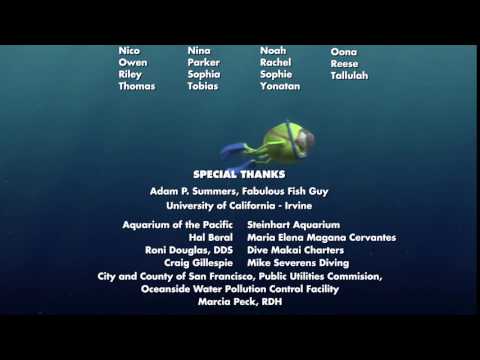 #3 of 590 The Best Animated Films Ever #97 of 1,009 The All-Time Greatest Comedy Filmslisted on Every Oscar Winning Film Ever

19 Hilarious Memes About Crossfit That Get It Just Right

The Best Xbox 360 Racing Games of All Time

The Best Songs with Body in the Title