39 LISTS The Great OutdoorsLists about hiking, climbing, camping, where to do it, what to bring, and what could happen once you get there.
Human Bodies Found by Hikers Please Try Not to Destroy Our National Parks The Very Best Backpack Brands Ranking the Best Hiking in the US Everyday Carry Essentials for Outdoorsmen Treacherous Hikes in America Vandals That Ruined the Wilderness Songs About Nature Sunscreen That Isn't Too Greasy The Best States for Camping The Best Hiking in the World Outdoor Activities Everyone Loves Essentials for a Bug Out Bag Shoe Brands for Rock Climbing Camping Hacks for Your Next Trip The Best Hiking Shoe Brands Outdoors Stores to Shop Online Vintage Pics of Mountain Climbers The Best Paraben-Free Sunscreen Dog Breeds That Love Hiking
Photo: Wikimedia Commons

There are more insane true stories of mountain climbers out there than you can count. Unfortunately, more than a couple of these stories end with climbers losing their lives doing what they love. Everest, K2, Nanga Parbat, and many more of the world's tallest peaks are the settings for some of the most insane mountain climbing stories you'll ever hear.

Perhaps the saddest parts of this list aren't the stories about death, but what happened after the stories about survival and heroism. Too many of the great men and women on this list went on to die at young ages - some from illness or circumstances unrelated to climbing, but most as a result of future mountain climbing accidents. From Hermann Buhl to Anatoli Boukreev, many of these climbers could only avoid death so many times.

Fortunately, not all of these mountain climbing tales end in tragedy. Some of these men and women lived well into old age and others are still alive today. For some, it was the birth of their children that convinced them to come down the mountain; for others, they merely survived time and time again until they had had enough. No matter how these stories end, they all help to paint the picture of just what it means to be a mountain climber.
1
Anatoli Boukreev Saved Three Climbers on Everest
After successfully ascending and descending Everest, Antatoli Boukreev heard that another party that had gone up after him and gotten stuck in a storm. Instead of hoping they were okay, he climbed part of the way back up the mountain to save whoever he could find. While eight people died on Everest that night, Boukreev managed to find and save three others, even though it was almost negative 100 degrees Fahrenheit, with near zero visibility.

Is this insane?
2
Hermann Buhl's Solo Ascent of Nanga Parbat
No one had ever made it to the top of Nanga Parbat when Hermann Buhl attempted the feat in 1953. Then his climbing partner got sick so he decided to go it solo. Despite the fact that most of the people who have ever attempted to climb the mountain are dead, Buhl somehow made it up and down by himself, even after spending an entire night at 26,000 feet just clinging onto a narrow edge, trying not to fall asleep and die.

Is this insane?
3
Joe Simpson Crawled for Five Miles
The story of Joe Simpson  is one of the most well-known in the climbing world. While descending from the west face of Siula Grande in the Peruvian Andes, Simpson fell 150 feet into a crevasse. Amazingly he survived, but was badly injured and with nowhere to go, Simpson rappelled further down in what he calls “a form of suicide." However, instead of dying, he found a way out. He then crawled a distance of five miles over three days, to get back to base camp.

Is this insane?
4
Aron Ralston Cut Off His Own Arm
Unlike most of these crazy climbing stories, Aron Ralston's didn't happen at the top of one of the world's tallest mountains. If you've seen the movie, 127 Hours, then you are no doubt familiar with this story. Ralston became pinned between a boulder and a wall in a slot canyon in Utah. After five days, he amputated his own arm and was eventually rescued. Ralston obviously has a good sense of humor, as evidence by the title of his book, Between a Rock and a Hard Place. 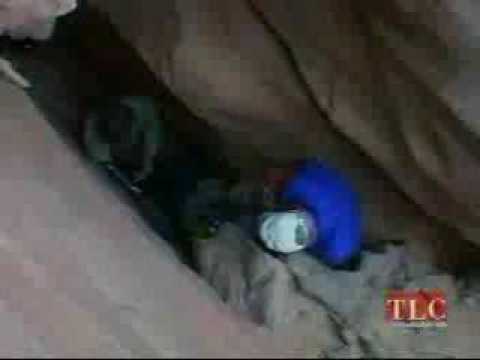