39 LISTS Film Buff Stuff Lists for every cinephile and "movie guy" on your trivia team.

Creating multiple films set in the same universe became a popular endeavor in the 2010s, as studios sought to cash in as Marvel has with the MCU. Disney, which owns Marvel, also snapped up Star Wars, and immediately employed the strategy of spinning off annual movies in the same universe. Other shared universe movies underway in the wake of Marvel's success include the Warner Bros MonsterVerse, which was created to bring Godzilla and King Kong face-to-face again, and Universal building a Dark Universe (interconnected remakes of the studio's classic monster movies like The Mummy, Dracula, and Frankenstein).

The shared universe films on this list differ from those in aforementioned cinematic universes in that they are not intentional attempts at franchise-building and serialization, but rather contain subtle clues and meta nods to one another. As you'll see, movies that take place in the same universe aren't always so obvious as to share continued plot threads. But there’s no doubting the link between them, no matter how small the sample may be.

Though Indiana Jones and the Temple Doom has a restaurant called Club Obi-Wan, Raiders of the Lost Ark offers the most concrete proof of the Indiana Jones and Star Wars films taking place in a shared universe. In the Well of Souls scene, Indie finds himself amid many hieroglyphics, one of which depicts C-3P0 with his hand on R2D2 as the two are greeted by the ancient Egyptians.

Call it a random Easter egg if you'd like, though such references are scattered throughout both franchises. The Ark of the Covenant shows up in Empire Strikes Back, and it’s been confirmed that Indiana Jones is, somewhat improbably, in the crowd during The Phantom Menace pod race. Maybe he finds a time machine in Indiana Jones and the Lackluster Franchise Expansion?

Agree or disagree?
2
ET And All The Star Wars Movies

Close friends Steven Spielberg and George Lucas changed the film industry in the 1970s and 80s, and had fun referencing one another's work while doing so.

In 1982, Spielberg paid homage to Lucas in ET the Extra Terrestrial by having the titular alien recognize a child dressed as Yoda in a scene that takes place on Halloween. Though this may have seemed like a joke more than proof ET exists in the same arena as Star Wars, Lucas confirmed the shared universe theory in Star Wars Episode I: The Phantom Menace 17 years later. A brief shot in the movie shows ET’s race, known as the Asogians, taking part in a Galactic Senate meeting. 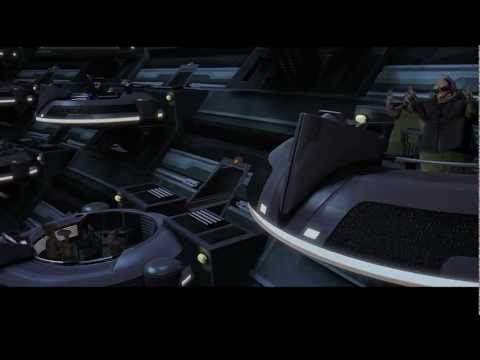 Agree or disagree?
3
Coming To America And Trading Places

Though Eddie Murphy is the protagonist in Coming to America and Trading Places, the antagonists connect the films.

Trading Places about a well-off broker and a poor street hustler who switch lives as part of an elaborate bet between two extremely wealthy men. Those men, brothers Mortimer and Randolph Duke, run a prosperous commodities brokerage in Philadelphia.

In Coming to America, Murphy plays an African prince who moves to Queens and gets a job at a fast food restaurant. The Duke brothers appear briefly in the film; they are homeless, and are given a large sum of cash by Prince Akeem (Murphy). Their homelessness no doubt stems from financial ruin visited upon them by the men whose lives they toy with in Trading Places.

When Prince Akeem throws cash at the Duke brothers in Coming to America, Randolph says, “Mortimer . . . we’re back!”, confirming the John Landis-directed movies take place in a shared universe.

Agree or disagree?
4
Blade Runner, The Alien Franchise, And Predator

The dark, futuristic worlds of Blade Runner and Alien are linked by the two men running their most powerful corporations.

In the Prometheus Blu-ray special features, artificial intelligence creator Peter Weyland talks about his “mentor and long-departed competitor.” He makes references to how this man ruled like “God on top of a pyramid overlooking a city of angels.” These are obvious references to fellow AI mastermind Eldon Tyrell, the creator of Blade Runner's replicants, who ran Tyrell Corporation from a pyramid-shaped building in dystopian Los Angeles.

There are several other Easter eggs that have popped up in the history of these two franchises, but this is the clearest example of a crossover. Because Prometheus exists in the same universe as Blade Runner, all other Alien films must, as well. By extension, the Predator films also take place in this universe, because of Aliens vs Predators. Here's hoping Schwarzenegger ends up in a time-travel-based Predator-Blade Runner-Alien crossover.

Women Who Dennis Rodman Has Dated

The Greatest Scientific Breakthroughs Of 2020

The Best Buckethead Albums of All Time

Members of the Guinness Family

The Best Florida State Seminoles Quarterbacks of All Time