Most diehard cinephiles love camp. Who doesn't have a soft spot for Beyond the Valley of the Dolls and co.? Less appreciated by the general public and legions of wannabe critics haunting the dark digital corners of the Internet are those serious movies that are unintentionally hilarious, be they farcically existentialist French movies (there's no shortage of those, just as there's no shortage of brilliant Gallic films) or pretentious movies that are hilarious in their pitch-black, angstily despairing humorlessness. (The end of the world ought to facilitate comedy, not render it superfluous).

Movies that fall into this category have myriad incarnations, from over-the-top French gems like Catherine Breillat's Anatomy of Hell to the likes of River's Edge, an ostensibly serious drama hijacked by the ludicrous performance of Crispin Glover. In any case, movies so bad they're fun are perpetual delights, and many have even come to be regarded as masterpieces. Several, in fact, have even been recipients of Academy Awards, despite how tragically awful they are.

It's hard to say for certain why heavy films that are accidentally funny are often regarded as serious works of cinematic art. The answer requires a good amount of sociological legwork, but perhaps in the end, it comes down to nothing more than marketing. The right presentation/angle is calculated to put critics and audiences alike in a serious frame of mind, tricking them into taking disasterpieces of accidental hilarity seriously.

The original Wicker Man, which stars the legendary Christopher Lee, is a cult masterpiece. The 2006 remake, starring Nicholas Cage, was a screeching (and scorching) turkey. With his hysterical exclamations, exaggerated facial expressions, and hilariously overwrought pathos, Cage tears up the screen, and the film is fun to watch because of it. But you should bear in mind, as you watch the absudirty on display in the video above, that the movie was not intended as a comedy. 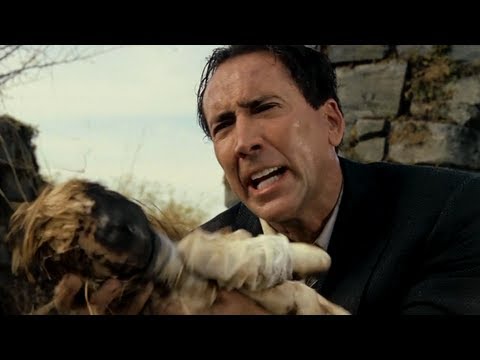 The two spend the rest of the film locked in a room together. Cesar's character writhes naked on a bed, articulating her despair as she menstruates all over the sheets. At one point, she sticks her bloody tampon in a glass of water and gives it to her existentially disgusted companion to drink; he obliges, and later on absentmindedly and symbolically inserts a rake handle into her butt as she sleeps. They also screw in a menses blood bath. Even though he's gay. All in the name of feminism and the ceaseless futility of having a vagina.

It's worth noting that Breillat has also made some fantastic films, like 2009's Bluebeard, 2010's Sleeping Beauty, and 2001's Fat Girl; but this stuck turkey ain't one of her best.

Thanks to Foxcatcher, the world knows what it would be like if a wannabe art film director tried to be Oliver Stone, or vice versa (check out the helicopter scene for evidence). Taken as a whole, Foxcatcher is a turgid wallow of nonsense enraptured with its faux-artistic non-aesthetic. While it smugly struts about the scene pretending it has important things to say about wealth and masculinity in the United States, the film accidentally stomps its way into the wilds of high camp, such as when John du Pont (Steve Carrell) tells his fawning protegee Mark (Channing Tatum) to call him Golden Eagle.

4
Requiem for a Dream

Like his accidental camp classic Black Swan, director Darren Aronofsky's exploration of drug abuse in Brooklyn, Requiem for a Dream, is so jacked up you can't help but regard it, to a large extent, as over-the-top despair-porn. Unlike similarly sordid drug movies such as Trainspotting, Requiem for a Dream makes little attempt to explore the nuances of drug use (though there are a handful of blissed out and gorgeously poignant and romantic scenes, which are by far the best in the film). It takes an oddly puritanical approach to life itself, depicting it as nothing but relentless misery.

Over and over again, Requiem for a Dream tosses out lines and scenes that wouldn't seem out of place in a comedy, despite its famously melodramatic music and belligerently bleak tone. For one thing, there's that bit about Jared Leto's heroin-ravaged arm having to be amputated. Then there's Ellen Burstyn's brilliant but hallucinogenically-campy tour-de-force performance as a speed addict.

More Requiem for a Dream