The fear of copyright infringement (or perhaps lawyers in general) keeps movie character cameos in cartoons intricately stealthy. However, it doesn't stop most adults who still enjoy kid's shows from reveling in any and all of these cartoon easter eggs when they're discovered, especially those alluding to their favorite films. Thank goodness for parody law.

Movie homages in cartoons are slightly easier and cheaper to get away with than straightforward guest appearances, but they still need to be sly as Stallone to pull off without risking legal ramifications. It's important to remember that while most animated series are technically geared towards children on paper, it's grown-ups with a wealth of knowledge in television and film who are putting them together from start to finish. This is why they are loaded with blink-and-you-miss-them vignettes which often go right over children's heads so as not to arouse suspicion. Weird cameos in cartoons aren't in short supply if you know where to look. Or better yet, which creators have the sickest senses of humor.

1
Shaun (Of The Dead) And Ed On 'Phineas And Ferb'

In what can only be described as one of the most anticipated movie character cameos in cartoons, both Simon Pegg and Nick Frost reprise their roles from Shaun of the Dead in a one-hour Phineas and Ferb Halloween special titled "Night of the Living Pharmacists" back in 2014. Fans of the film didn't even care about the context of their revival as long as they were back. As you can see, they didn't need to, either, since the brief but memorable appearance speaks for itself. 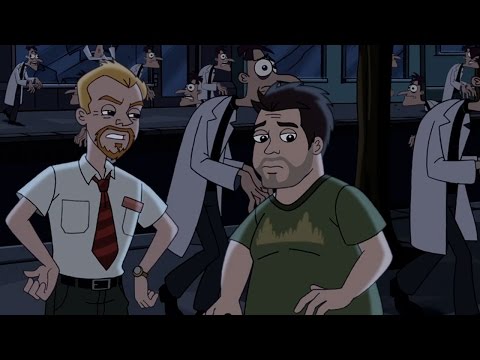 Was this surprising?
2
The Dude On 'The Powerpuff Girls' And 'Foster's Home For Imaginary Friends'

Jeff "The Dude" Lebowski (Jeff Bridges) is pretty unmistakable in appearance, as are the cartoons of frequent collaborators/married couple Craig McCracken and Lauren Faust. It makes perfect sense, then, since they are huge fans of The Big Lebowski, The Dude and his supporting cast have been paid homage on both The Powerpuff Girls and Foster's Home For Imaginary Friends numerous times.

The Dude popped up again as a pony alongside Walter and Donny (and Jesus) again on Faust's creation My Little Pony: Friendship Is Magic. That's hardly the most adult reference to a film made by the kid's show, though.

Was this surprising?
3
The Monstars On 'Pinky And The Brain'

If you want to make your cameo appearance in a Star Wars parody as below-the-radar as possible, the obligatory cantina scene is usually your best bet. Considering we never thought we'd see Bang and Pound again after there embarrassing defeat at the hands of the Tune Squad in Space Jam (especially in their Monstar form), it's an added treat they show up here among a slew of other Warner Bros.-owned characters like Marvin the Martian, Freakazoid, and yes, even the Arnold Schwarzenegger version of Mr. Freeze from Batman & Robin. We could have gone without ever hearing from him again.

Was this surprising?
4
Roger Rabbit On 'Sport Goofy In Soccermania'

What's more obscure than an animated special aired only once on NBC in 1987 for the sole purpose of shameless product promotion? If you guessed a cameo from a cartoon rabbit who hadn't even debuted in his own feature film yet, you'd not only be on the right track, but probably know way more on this subject than you rightfully should.

That's right, Roger Rabbit first appeared as a glorified extra in a TV special that went on to spawn a little known children's cartoon called DuckTales. Is there anything subliminal corporate merchandising can't do?

The Top 20 Bible Passages to Use Against Fundamentalists

A Timeline Of The Entire ‘Abducted in Plain Sight’ Case

The Best Seasons of 'Survivor'

People Who Work Alone Describe Their Creepiest Experiences On The Job