Some losing celebrities truly look on the verge of tears, while others clap a little too hard, curse under their breath, or smile a little too widely behind their dead eyes. To revel in their momentary pain, we present the best loser faces of the Academy Awards. Don't feel too sorry for these Oscars losers. After all, it's an honor just to be nominated. Right?

Data-driven recommendations based on voting from over 40 million monthly visits to Ranker. Try the free app
1
Anne Hathaway 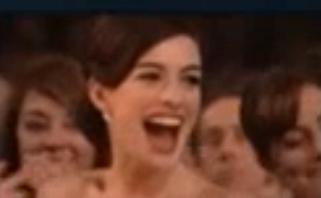 Anne Hathaway for Rachel Getting Married lost out to Kate Winslet in The Reader for Best Actress in 2009. Are you really that happy, Anne? Really?
Is this amusing?

Minnie was nominated for Best Supporting Actress in 1997 for her role in Good Will Hunting, but lost to Kim Basinger in L.A. Confidential. Her big, sardonic "wow" reads less like, "I'm genuinely happy for you," and more like, "How the hell did that happen?!"
Is this amusing?

Helena Bonham Carter was nominated for Best Supporting Actress in 2011 for the movie The King's Speech. However, she lost to Melissa Leo for The Fighter and mysteriously still doesn't have an Oscar. Yeah, we'd probably make that face, too. But hey, it's an honor just to be nominated.
Is this amusing?

Beth Thomas, The 'Child Of Rage,' Showed The World What A 'Psychopathic' Child Looked Like

The Best Songs With Grow in the Title

The Worst People Ever On MTV's My Super Sweet 16

The Worst Episodes Of 'The Office'

Female Celebrities Who Are 6’0"