From Easter eggs of the smallest minutia to grand, sweeping conspiracy theories, these Breaking Bad fan theories truly leave no stone unturned. You won't find any bombastic, cheesy theories here - nearly every Breaking Bad fan has heard of the possibility that Jesse could be Walt's unknown, biological son. Yet is that actually plausible? Doubtful. The theories on this list earned their spots based on their high probability factors and factual merit. You'll even find theories that the show's creator, Vince Gilligan, has refuted (such as Walt freezing to death in his car and having a hallucinatory fantasy dream), as well as fan theories and Easter eggs he's publicly confirmed (like a call back to another series he executive produced, The X-Files).

So scroll through the list and vote up the most plausible Breaking Bad Easter eggs and fan theories, and add your own in the comments. What happened to Jesse after the events in the series finale, "Felina"? What really caused Walt's cancer? Who is Walt Jr.'s actual biological father?

Walt clearly does this - yet fans speculate whether this is a sign of Walt's remorse for killing, or if the writers are drawing attention to Walt's increasing willingness to adopt more Machiavellian traits (like ruthlessness and manipulation) from those he encounters in the criminal world, symbolized by his adaptation of their more innocuous traits. Throughout the series, we see him adopt Krazy 8's crust cutting, ask for a Scotch on the rocks a la Mike, and place a hand towel underneath his knees before vomiting, exactly as Gus had done in Mexico.

RJ Mitte of Breaking Bad says: "I guess that makes sense. The thing is that everyone develops traits from their actions. I think as his character kept growing, and became this monster."

Is this plausible?
2
The Car Company That Walt Rents from Is from The X-Files

Fans spotted this as an easter egg from Gilligan’s days as a staff writer and executive producer on The X-Files. When Walt rents a van to drive his barrels of money out to the desert to bury them, the car company he uses is the one that Mulder and Scully originally used on The X-Files.

“That is correct,” Gilligan told The Hollywood Reporter. “That was an X-Files shoutout,” he explained, adding that the car company was Lariant Car Rental - it also made cameos on Veronica Mars and Supernatural.

And that's not the only X-Files similarity from Breaking Bad: check out the entire rundown here. 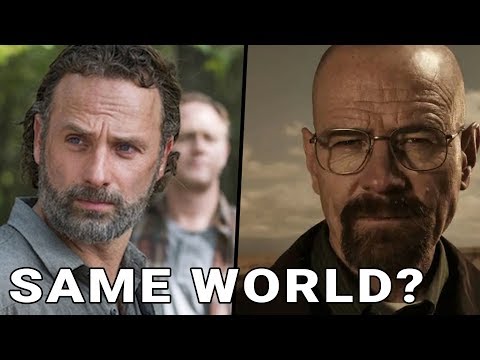 Is this plausible?
3
Gale Botetticher Was a Sex Offender

What if the reason Gale (a chemist with an MS in organic chemistry) worked as a meth cook for a criminal organization was because his sordid history prevented him from being able to secure a position in regular society? Specifically, what if he was a registered sex offender?

Botetticher's video, "Major Tom," had Thai subtitles, which implied that Gale had been to Thailand (which has a reputation for sex trading, especially sex workers who are minors) recently. We also see a flashback photo of him that looks an awful lot like a mugshot, not to mention Botetticher's oddly phrased comment to Walt: "Consenting adults want what they want. At least with me they’re getting exactly what they pay for."

While Gale is an admitted libertarian (he has no moral qualms with cooking meth), this theory still works.

Is this plausible?
4
Jesse Redeems Himself, Ultimately "Breaking Good"

Reddit user fuhqueue suggests, "A theory I have is that Jesse will end up happily married with two kids, while Walt will end up dying alone. Walt started out as a nice guy and broke bad, while Jesse started as 'a bad guy' and then gradually [became] more and more of a nice person with a heart. Meaning, at the end of the show, they will have switched places completely. And who knows, maybe Jesse will become a chemistry teacher, after everything Walt has taught him."

RJ Mitte of Breaking Bad says: "I don't know how about this. He did leave Walt to die, but he would have been in the same position too. I think in a way he has gone off to redeem himself, but he's super messed up."