16 LISTS Eight-Legged Freaks Lists of pics, vids, and facts about spiders and other arachnids for the masochist in you.

The Scariest Types of Spiders Terrifying True Infestations Surprise! There's a Spider Under Your Toilet Seat Cute Spiders That Will Cure Your Arachnophobia Meet Giant Orb Weaver Spiders The Deadliest Spider Species Click Here for Tarantula Facts Spider Myths and Urban Legends Spider Recipes, In Case You're Into That The Best Songs About Spiders Amazing Battles Against Insects The Biological Imperative for Arachnophobia Movies That Have Spiders in Them The Biggest Spiders On Earth Up Close with the Brown Recluse Creepy Pics of Spider Frost
Photo: user uploaded image

It's estimated that at least four percent of the world's population has arachnophobia, which is a pretty high percentage considering how few of the little guys are actually dangerous. But there are some rare yet cool-looking spiders around who are here to try to help quell your arachnid fears. While they may not totally eradicate your distrust of the eight-legged creatures, you may see something in them that is a little more compelling than something you may want to smoosh with a rolled up magazine.

Spiders are crucial to the ecosystem and have probably been around in some form, longer than humans have, by millions of years. As humans has evolved, they have too — they live all around us, in every nook and cranny the world has to offer. That's not meant to scare you — they generally like to be left alone to do their thing and are a bit of natural pest deterrent. In a world without them, for example, we wouldn't have much in the way of agriculture, as they eliminate the prey that affects crops.

Spiders play a part in daily lives in ways you probably rarely think about. So put down that shoe, give 'em a break and take a look — you may just fall in love with these seldom seen, unique arachnids. Some come to dance, others come with a smile, and all are an equally fascinating part of the place we call home. Vote up the most bizarre yet fascinating spiders!

Of all the spiders on this list, the peacock spider gets big points for not only its adorable dance moves but overall cuteness. While there are several species of this arachnid, they all share specific characteristics — they're trippy and furry, they have front-facing eyes and can cut a mean rug with their eight legs. The males "dance" to woo a potential mate, by raising their brightly colored fans, throwing their legs in the air and...well, waving 'em like they just don't care. But out there on nature's dance floor, it is indeed a "ladies choice" — if the female spider doesn't like what she sees, she eats rebuffs, or eats, her suitor. 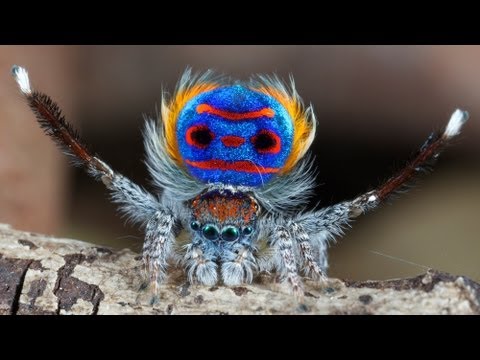 A bright blue tarantula — say what?! The Gooty Sapphire Ornamental Tree Spider (Poecilotheria metallica) is a favorite among enthusiasts, but be careful—these spiders are fast and have a strong, venomous bite that has been described as "medically significant."

The Gooty Sapphire, named after the town in South Eastern India where it was discovered in the late 19th century, is about six to seven inches long and females can live up to 12 years for females, while males typically live three to four years. Gootys that are available for purchase are all from captive-bred ancestors — in the wild, the spider is considered critically endangered. 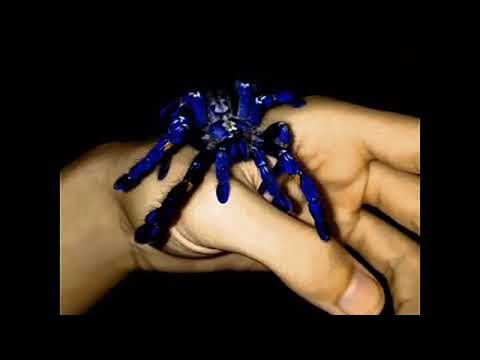 Is this fascinating?
3
Chinese Hourglass Spider

The Chinese hourglass spider has been around for empires — it dates back to 2 BC, and there is even a nod to it in Er Ya , the country's oldest surviving dictionary, published at around the same time. For a spider that's been around as long as it has, you'd think it would be better known, but it has been only seen six times since being rediscovered by a farmer in China's Sichuan Province in 2000.

An arachnid of the trapdoor variety, it's rarely been spied by human eyes for the simple reason that it lives its life behind a trapdoor made from a mix of soil, sand, and plant detritus and rarely peeks its head out into the great wide open. Watch its hunting technique in action here . 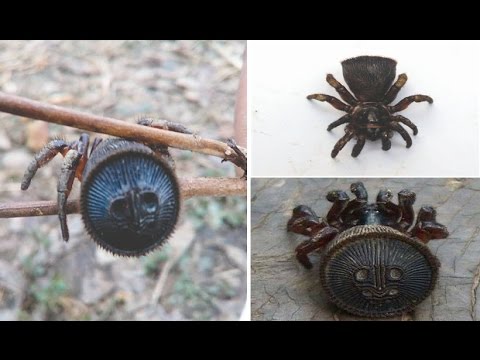 These devilishly cute spiders (also known as Macracantha arcuata and curved spiny spider) hail from Singapore, East Malaysia, Indonesia, Thailand, Myanmar, Sri Lanka, and India. Some have also made the journey to the US via imports. Not much is known about these diminutive (10 mm long), hard-bodied arachnids or the purpose of the horns. Some etymologists believe they are just for show and help in warding off hunters. They are currently considered vulnerable to extinction due to the decimation of their rainforest habitat. 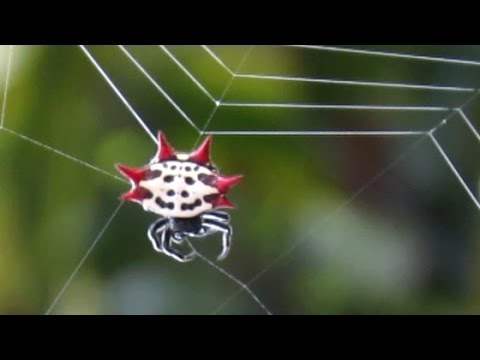 Bachelor Contestants With And Without Their Makeup

The Best Musical Guests on 'The Ellen DeGeneres Show' In 2019