12 LISTS Carnal Knowledge Are you engaging in the physical act of love or thinking about doing the deed? Or are you the product of mating or a human being alive in the modern world? If so, read these lists immediately. Your life depends on it.

Strange Outdated & Ancient Beliefs
The Science Behind Our Methods
All About Doing It During Pregnancy
Weird Things That Can Ruin Intimacy
What Happens When You Quit
Weird Methods of Birth Control
Such a Thing as Too Much
What's the Deal with Asexuality?
STD Facts to Text Your Ex
The Reasons for Your Attraction
What Different States Teach in Schools
STDs Are Back in a Big Gross Way
Photo: GoodtoKnow.com

Before we even get started, it's important to consider Family Guy's take on the situation. Watch the video on the left for what can possibly be waiting for suicide bombers when they reach their afterlife.

It would be awesome.

According to the Hadith, a collection of sayings generally contributed to Muhammad, number 2,562 of the collection Sunan al- Tirmidhi reads, "The least [reward] for the people of Heaven is 80,000 servants and 72 wives, over which stands a dome of pearls, aquamarine and ruby."

Perhaps the term "wives" is less specific than "virgins," but in Islamic tradition, it's basically expected that women save their virginities for their husbands. Unless they've had a sigheh already, which under these conditions, I'm guessing they have...

Here's what you never really consider, though. Are these the same 72 hot-enough-to-warrant-killing-yourself, somehow-immortal-and-indestructible chicks for everyone else? Or is this where women go in the afterlife? Being one of the servants in Islamic heaven would surely suck. Do they draw straws?

Either way, a man who needs 72 virgin wives at his every beck and call has a LOT more in mind than raising children, getting some kick-ass cooking and being yelled at. Dude has some crazy s**t planned that probably involves a system of pulleys.

Either way, if you believe in Fundamentalist Islam it's really quite awesome and definitely something to look forward to. Think about it. If you can realistically swallow the ideology, get behind it and live it right, it definitely should make life a little more like a Friday than the whole "waiting to die" mentality. Having something to look forward to that's THAT awesome might have its upsides. For example... 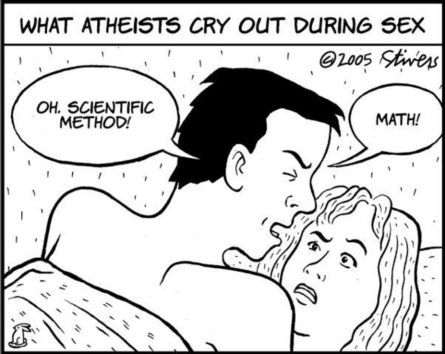 Catholicism: Our Priests Aren't Pedophiles, They're Gay... So It's Okay to Molest Kids

While this may not be a rule stated by The Bible itself, it is one that is accepted by Catholics everywhere because the group that has become their delegate to the media has not only stated it, but fought for it and justified it to high heavens -- which makes it that much crazier that some people believe this.

According to Bill Donohue, president of the Catholic league, the crisis in the Catholic Church is not pedophile priests, but rather, homosexual priests.

Donahue claims that 80% of victims are male and past puberty, and hence, count as young adults (12 - 17) rather than children.

So basically, according to the Catholic League, if you're old enough to be reading Fear Street instead of Goosebumps, you're officially qualified to be touched anywhere by your local Priest.

A "Niddah" in orthodox Jewish culture is a woman on her period, and according to Jewish law, husband and wife have to be separated during the "Niddah's" menstruation.

The Torah holds that a man is not permitted to sleep with his wife when she is a "Niddah."

It's not unheard of for couples to abstain during the woman's period, but usually because they just did laundry, not because of a Jewish restriction that takes it to a whole new level.

Also, this was probably a rule that traditional comics like Henry Youngman would have appreciated being more of a norm "Take my wife... no really, please."

Intercourse outside of marriage is prohibited by law in Iran, but Islam offers an excellent loophole. A loophole that would mean a lot more people would be getting married (and then divorced) at an early age if this loophole existed under any of the Judeo-Christian belief systems.

"Sigheh" is the tradition of temporary marriage, and the only requirement is a permit for the period of the relationship (both parties agree to a time limit) and often, a dowry payment to the woman. It's kind of like buying a car, only the car can give birth.

"Sigheh" can last anywhere from five minutes to 99 years, and often it isn't even registered with the government or the church. According to Elaine Sciolino, "Sigheh legally wraps premarital intercourse in an Islamic cloak."

Hey, where there's a will there's a way. Some twosomes have even retained the permit in order to live and work in close quarters or comingle in public, in a completely platonic sense of course or at least until their marriage expires.

In some ways, this is a lot more realistic and forgiving. In some ways, it's actually cooler. Who wouldn't want to live under the rule of a "'Til we decide this is no longer a good idea" as part of marriage vows? *Sheepishly raises hand...*

The Best Big Bands of All Time

All US Military Training Programs, Ranked by Difficulty

The Best Songs About Pauls