25 LISTS Under the SeaDarling, it's better down where it's wetter.
Creepy Underwater Creatures Ocean & Sea Creature Facts to Blow Your Mind Photographed for the First Time 45 Reasons to Stay Out of the Ocean Cool / Scary Facts About Sea Creatures Weird Animals Washed Up on the Beach Horrifying Found Creatures A Guide to the Biggest Things in the Ocean Stunning Jellyfish Wow So Many Nudibranchs! How Smart Are Cephalopods? Animals You Can See Right Through Stunning Sea Caves Around the World Hey, Looking for Songs About Fish? Unbelievable Camouflage Lovely, But No Backbone The Best Seafood to Eat Beautiful Pics of Sea Squirts Amazing Albino Aquatic Animals What Creature Do You Want to Be?
Photo:  via The One World Collective

Life is strange in the deep ocean, and the animals that dwell in its pitch blackness are like nothing else on Earth. The only light that illuminates the abyss is the bioluminescence of the organisms that live there. That's a good thing, too, because many of them are absolutely terrifying to behold.

Some of these monstrosities are gargantuan in size, as life in the deep sea tends to make animals larger. Meters-long tentacles, enormous teeth, and prodigious jaws are all common near the ocean floor. These are the creepiest sea creatures in the deep ocean, and once you realize they're down there, it may be difficult to step into the water again.

This gruesome creature is best known for the glowing lure on its head, which it uses to entice its prey. Since food is so scarce in the depths, the anglerfish has an unusually large belly designed for food that must be swallowed whole.

In many species of angler, like the humpback anglerfish, the females grow to sizes much larger than their male counterparts. In fact, male anglerfish look almost nothing like the females. They are small and nondescript and exist for the sole purpose of finding a mate. If one is lucky enough to find a female, he bites into her flesh and becomes a parasite that feeds off her blood.

In some species of anglerfish, the male remains attached to the female for the rest of his life. Fused to her body, his eyes and organs atrophy until he becomes nothing more than a reproductive tool.

Is this terrifying?
2
The Colossal Squid's Tentacles Each Feature 25 Rotating Hooks

As its name suggests, the colossal squid gives the giant squid a run for its money. This massive species can grow over 45 feet in length, although most of the data we have on colossal squids comes from juvenile specimens. Colossal squids spend most of their lives in depths of over 1,000 feet and rarely come to the surface once they reach adulthood.

These predators have the largest eyes of any animal on earth, and one of the largest beaks as well. If that's not scary enough, they also have 25 rotating hooks on the tips of each of their tentacles. 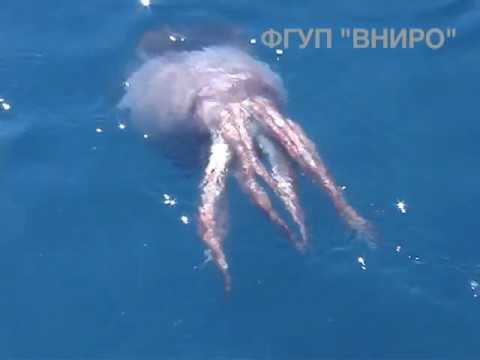 Is this terrifying?
3
The Lion's Mane Jellyfish Has Over 800 Tentacles

The lion's mane jellyfish is the largest species of jellyfish in the world. These gigantic cnidarians come in a spectacular range of colors, including purple, yellow, red, and orange.

While they may be pretty, you most definitely want to keep your distance from these bad boys. The lion's mane jellyfish has 800 individual tentacles that can measure up to 98 feet in length. Their bodies alone can grow to eight feet in diameter.

Is this terrifying?
4
The Japanese Spider Crab Can Live For 100 Years

If you're afraid of normal land spiders, then you probably won't be happy to learn there are giant ocean spiders lurking beneath the waves. Japanese spider crabs are truly humongous. Their legs alone can measure a whopping 13 feet in length, and their bodies can weigh about 40 pounds.

Found at depths of over 1,000 feet, these crustaceans are believed to live up to 100 years. The spider crab is a delicacy in Japan, which has contributed to a significant decline in its population.

Is this terrifying?
LOAD MORE
Filed Under: Animals / Plants Sea CreaturesGraveyard Shiftnature
more popular lists
History 308.9k readers The Only Prisoners To Ever Escape Alcatraz Made Shockingly Lifelike Decoys To Fool The Guards Celebrity Couples 190.6k people have read Matthew McConaughey's Loves & Hookups Devils & Demons 85.4k people have read Here Are 13 Paranormal Games That You Will Wish You Had Never Played Adaptations 93 people have voted on The Best Zorro Movies and Shows