His Most Spidey Costumes in Film, Ranked
MCU Moments Ripped Straight from the Comics
Fun Facts About the Film Trilogy
The Case for Andrew Garfield
Acts by Spider-Man Villains
Peter Parker's Loves & Girlfriends
Hilarious Quips & Zingers
Best Comic Artists
Every Spider-Man in Comics, Ranked
Spider-Man's Worst Life Experiences
Easter Eggs You Missed in 'Far From Home'
His Greatest Suits and Costumes
Who Has Played the Best Spider-Man (So Far)?
Fan Theories About His Future in the MCU
Lamest Villains
Best Storylines in the Comics
The Best Villains in Spider-Man
Who Is Spider-Man 2099?
Funny Moments in the Comics
How Venom Became One of Spidey's Allies
Photo:  Sony Pictures

Spider-Man 2 is a far more amazing film than the falsely labeled Amazing Spider-Man 2. In fact, Spider-Man 2 might be the best superhero sequel ever (with all due respect to X2: X-Men United, Superman 2 and Captain America: The Winter Soldier).

There is plenty of evidence that illustrates why Spider-Man 2 is the best sequel of all time. Whereas Iron Man 2 lost the original's buoyant energy and Ghost Rider 2 made you wish the fire would engulf more than just the protagonist's head, Spider-Man 2 — like all the best sequel movies — built upon its predecessor. The scope was larger yet more intimate, the plot funnier but at the same time more serious.

If you disagree, read on so you can understand why Spider-Man 2 is the greatest superhero sequel.

If you already believe these Spider-Man 2 truths to be self-evident, then this list will confirm your good taste!

The always fantastic J.K. Simmons's portrayal of J. Jonah Jameson may be the purest translation of any comic book character to the big screen. He manages to be larger than life, broadly comic, and completely believable all at once.

Spider-Man 2 works him more directly into the plot by having his son get engaged to Mary Jane. When MJ goes full Runaway Bride, the ever frugal J. Jonah's biggest concern is canceling the catering. He might not win Father of the Year, but we expect nothing less from Spidey's irritable boss.

Is this a good point?
2
The Runaway Subway Scene Is Comic Book Magic

For diehard superhero fans, few things are more exciting than flipping through a comic book's action scenes. With each subsequent page, you are made to wonder "how will Spidey get out of THAT?"

When you go to see a superhero movie, you hope that the film will match the excitement of tearing through a good comic book. X2: X-Men United and X-Men: Days Of Future Past both feature Magneto enacting wildly inventive prison escapes, Captain America: Civil War contains the ultimate superhero battle royale, and Spider-Man 2 has our hero trying to stop a speeding subway.

This would be a relatively easy task for Superman, but for Peter Parker, the crisis presents a real challenge. It's a tension-filled, visually arresting set piece that culminates with the passengers saving an unconscious Spider-Man from plummeting off the front of the train. What more can viewers ask for? 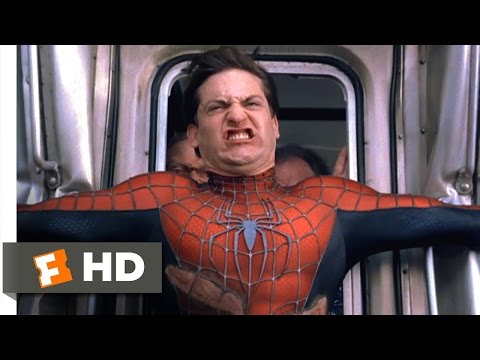 Is this a good point?
3
The Effects Are A Major Step Forward

Despite being made only a few years later, Spider-Man 2 manages to make the first film look old and outdated. The CG body of Spider-Man seems more fluid, especially when he's swinging along the NYC skyline. During combat sequences, his brawls with Doc Ock feel far less cartoony than his fights against the Green Goblin.

Out of all the second film's visual improvements, the greatest might be making Doc Ock's tentacles look so photorealistic. If that effect hadn't landed believably, the film wouldn't have worked.

Is this a good point?
4
Only Alfred Molina Can Talk To A Metal Arm

Willem Dafoe is a talented, Academy Award-nominated performer. Despite this, Spider-Man (2002) put him in a situation few actors could smoothly pull off. As he loses grip on reality, Norman Osborn begins speaking to his imaginary frenemy: himself.  It leads to some of the first movie's sillier moments and detracts from Dafoe's performance.

Alfred Molina was asked to do something equally difficult in Spider-Man 2. Doc Ock has to talk to his tentacles as though they are alive and cognizant. Yet somehow, Molina makes it seem like he's actually reasoning with his own metal arms. If that's not acting talent, then what is?

The Best Commodores Songs of All Time

The Worst Guns in History

The Most Memorable Contestants On MTV's 'Road Rules' - Where Are They Now?

Women Who Rick Fox Has Dated