42 LISTS The Universe of Harry PotterLists about the wizarding world that captured the imaginations of children and adults alike and forever changed the way we view owls, brooms, and round eyeglasses.
Fan Theories to Really Think About The Film Actors: Then and Now The Actor Behind the Snape The Case for Hermione & Harry Bizarre Plot Points Cut from the Books Fan Theories About FB:TCoG Very Awkward Promotional Pics Actors Who Were Almost Cast Brilliant Magical HP Tattoos Ranking the Books, Best to Worst All Houses at Hogwarts, Ranked Every Wand in the Series, Ranked Your Favorite Characters Jokes for All Harry Potter Fans Feasts You Want to Gobble Up All the Movies, Ranked The Series' Most Brutal Deaths The Universe's Most Powerful Wizards The Series' Most Brutal Insults The Subscription Boxes You Need
Photo: Warner Bros.

Not to be outdone by the Twilight crowd, here are the 13 craziest moments in Harry Potter fandom, including the 13 craziest Harry Potter tattoos of all time on page 3. Now that the films for one of the biggest cultural phenomenons of the last 10 years comes is out, insane fans are geeking out in full form. Check out this list to vote on the Harry Potter movies from best to worst.

What have crazy Harry Potter fans done to be called crazy? From stalking cast members to taking liberties with photoshop, these are some of the weirdest manifestations of funny Harry Potter fandom ever.

Be sure to check out Ranker's other lists like, Justice League Characters and list of airplane manufacturers.
1
This Guy

In a contest for the biggest Harry Potter fans ever, this guy reveals that he's read every book multiple times (according to him over 100 times).

He's read every single piece of merchandise ever.

Three rooms of his house are filled with Harry Potter merchandise.

He wore a wizard robe to his prom.

He draws pictures of the characters (which actually aren't bad but jeez.)

He has a neck tattoo. 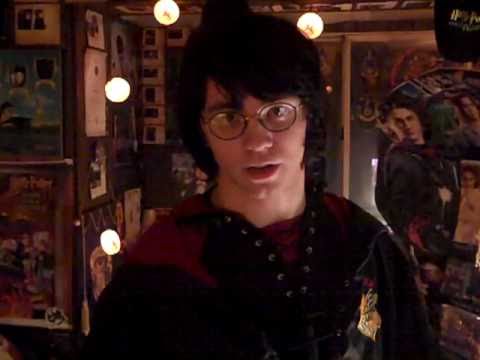 While visiting America, Tom Felton, who plays Harry Potter's sub-nemesis Draco Malfoy, got a great taste of what it's like to be famous in the good ol' US of A when a Harry Potter fan offered to adopt him.

That's right, someone offered to become his legal guardian while he was still underage, and to take them to their house, and then to eventually live in a house with him named after his character in the films (Malfoy Manor).

The man then showed him documentation and sent him documents (the ones he actually needed) to disown his parents and move in with him.

Agree or disagree?
3
The Creepiest, Most Endearing Harry Potter Fan Meets the Cast

Here's some back story: a Japanese show held a contest where 10,000 insane Harry Potter fans competed for a chance to visit the UK set of the Half-Blood Prince movie and meet the stars in person. A girl named Kana won. Needless to say, to win the contest, you need to have the ability for your insanity to exponentially grow to uncharted levels.

Enter the showpieces where Kana tries on a hat and is faux-stalked by different members of the cast.

When Rupert Grint dorkily sneaks up on Kana at 4:33, his appearance practically sucks all the breath out of her body. When she regains composure, she does the creepiest thing she does in the whole video:

She asks what she also asks of Daniell Radcliffe, which is sheepily ask "Touch Ok?". After she gets confirmation that "touch" is "ok", she touches the celebrities' faces and then smells her fingers.

This means that either Ron Weasley's eyelashes were made of a fine, sophisticated cut of cocaine or she's just really that Buffalo-Billesque.

The only recourse the audience and Rupert had at this insane, insane moment was to laugh with the nervousness of a man about to die.

But that's not even comparable to when she meets Daniel Radcliffe, which needs to be seen to be believed.

1:02. Longest hand-shake ever, complete with sparkly Japanese game show sound effects and a hilariously awkward Daniel Radcliffe saying the same two words over and over again in a situation where really, what DO you say?

And if you go to 2:37 of the video, you will witness the best of moment of the entire interview (and of this young girl's life) and a pretty accurate summary of what she does the entire time.

You need to watch 2:37 of this video. This girl is the cutest non-fictional psychopath in television history.

Emma Watson, who is now a student at Brown University (and for those of you keeping score 20 years old) was stalked by a bunch of Harvard geeks that ended up terrifying her and making great strides towards crapping directly on Harvard's name (Yale rejoices), as well as almost drawing police attention.

At a football game where Harvard was playing Brown these Ivy League gentlemen decided to participate in a school newspaper mandated game of stalking, just to make Emma Watson uncomfortable and to mess with their enemies (Brown).

The whole thing would've been alright, had their stunt been funny, but sadly for them, it was not. Here's what they live-tweeted during the game:

"We will be Live-Tweetin' the game and possibly stalking Emma Watson, so keep your eyes peeled for that, too!"
"Let’s go Hermione! Lolz,"
"In enemy territory. Lookin for a certain witch"
"WATSON FOUND. i repeat WATSON FOUND."

Ivy League education goin to good use, there.

Watson's reaction was reported to be "distressed", as she started going to school to get away from her "fame", which realistically will never "go away", not until the movies are over and/or until she gains a bunch of weight.

Your move, Watson. They'll be waiting.