16 LISTS Actors Acting WeirdStars: they're just like us! Complicated!
Charlie Sheen Has Tiger Blood, Y'all James Franco Is a Modern Eccentric RDJ Has Really Seen Some Things Sean Penn Is a Nightmare Gwyneth Paltrow Gives Bad Advice Bill Murray Is a Living Legend All the Keanu Reeves Stories Are True Angelina Jolie Has Done Some Twisted Things Wacky and Zany Shia LaBeouf Ben Affleck Is the Saddest Boy in Hollywood Tilda Swinton Is Intoxicating Val Kilmer Is Looney Tunes Gary Busey Is a Real Wild Cat The Jared Leto Rumors Are True Shailene Woodley Owns Her Quirky Oddballness Wesley Snipes Is a Lunatic
Photo: Ron Asadorian/Splash News
Johnny Depp is a badass. Here are some of the greatest things he's ever done (off-screen). Some of these Johnny Depp stories are hard to believe but most have indisputable proof; they are all amazing and sound exactly like the kind of awesome thing the most lavish, eccentric celebrities (that we actually like) would do. From surprising a little girl at her school, to stopping a mugging with a single look, to saving a horse he rode in a movie, here are the greatest (true) Johnny Depp stories.
1
Johnny Depp Surprises a Jack Sparrow Fan at Her School After a Fan Letter

This is why Johnny Depp isn't just an actor, celebrity or multi-millionaire, but a freakin' movie star.

(Click here for the full video of his visit to the elementary school.)

Celebrities receive tons of fan mail every day, and after being famous for decades like Johnny Depp, most people would be pretty jaded or out of touch with their fans by now. But, when nine-year-old Beatrice Delap, wrote "Captain Jack Sparrow" a letter asking him to help her and her other classmates stage a "mutiny" against their teachers, she was smart enough to give him the name of her school and signed it "Beatrice Delap, aged nine, a budding pirate." Since he was in the area filming Pirates of the Caribbean 4, he decided to visit the school while still in full costume. Without warning to the school, the kids or the teachers, Depp arrived at her school in full Jack Sparrow character and dress. Everyone was surprised, and no one had any idea why he was there – except for Beatrice.

Depp asked for Beatrice and when she came forth, he whispered to her: "Maybe we shouldn't mutiny today 'cos there are police outside monitoring me." He gave Beatrice a hug, joked with the whole classroom about eating lots of candy and not brushing their teeth, never breaking character, and asked for a big round of applause for Beatrice. He then strutted out of the room and back into their imaginations. On May 2, 2010, a man approached Stephen Jones holding a bottle in his hand and demanded the British singer's wallet. Depp just happened to be with Jones as the two had just finished a recording session together in Los Angeles. As soon as Depp saw the mugger, he stepped right in to his defense.

Depp looked at the guy, using a stern gaze, and told him to back off. After a few seconds, when the mugger (who was using a broken bottle as a mugging weapon? really?) looked at Depp, he said, "I ain't stealing from Captain Jack." The thug put down his bottle and all was well.

This is really the greatest and most epic part, though: Depp gave him a few bucks and sent him on his way.

One of the most memorable names in 20th century pop culture, Hunter S. Thompson (famed author of Fear and Loathing in Las Vegas, creator of "Gonzo journalism," drug addict, and all-around anti-authority badass) had a lot of friends in his later years (John Cusack, Bill Murray, Gary Busey, John Kerry, William F. Buckley, and more), but when it came to his death, few were as giving and dedicated as Johnny Depp. Hunter S. Thompson, John Cusack and Johnny Depp riding in a convertible with a blow-up doll (like ya do).

Depp financed Hunter S. Thompson's funeral entirely, and even fulfilled what were his buddy's dying wishes:

Thompson's ashes were fired from a cannon atop a 153-foot (47 m) tower of his own design (in the shape of a double-thumbed fist clutching a peyote button) to the tune of Norman Greenbaum's "Spirit in the Sky" and Bob Dylan's "Mr. Tambourine Man. Red, white, blue, and green fireworks were launched along with his ashes.

Depp made sure everything was exact to Thompson's specifications (which were pretty specific in his will).

Here's a video describing the arrangements and the ceremony being performed

Somehow Johnny Depp always seems to commit the weirdest crimes. Even when the guy is doing something "wrong," he does it with style. He's never been arrested for doing anything outside of the realm of what you'd expect from him, even with all his money.

In 1994, Depp was staying at a fancy New York hotel and completely wrecked his room. Like, furniture everywhere, broken glass, the works. Roger Daltrey (lead singer of The Who) was staying in the room next door and complained of the noise Depp was making.

When police arrived at the scene, there was a smashed glass coffee-table and other destroyed, mangled furniture in the $1200-a-night suite. Depp, however, claimed that an armadillo leapt out of his closet and had done the damage. Yes, an armadillo. The alleged creature was never found. Not surprising since armadillos are rarely found in New York, and even less likely in a luxury hotel's closet, making Depp's claim of innocence that much more awesome.

Johnny Depp's cavalier attitude about his brushes with the law and incarceration make him even more awesome.

The other crime Depp was caught committing is just as unexpected, and pretty damn awesome (not including that paparazzi brawl he had, because really, who could stand those people). A security guard caught him vandalizing a 21 Jump Street billboard and was about to report him until he saw that it was the actor himself, defacing his own, well, face. Depp apparently didn't agree with the message that the billboard, featuring his own image, was communicating to children. The billboard featured Depp holding a gun with the slogan, "Other Kids Pack Lunch," underneath it. He saw that and didn't like it, so he and his buddy decided to paint over it with some brushes and rollers. They ended up painting over the gun and turning Johnny into Groucho Marx. 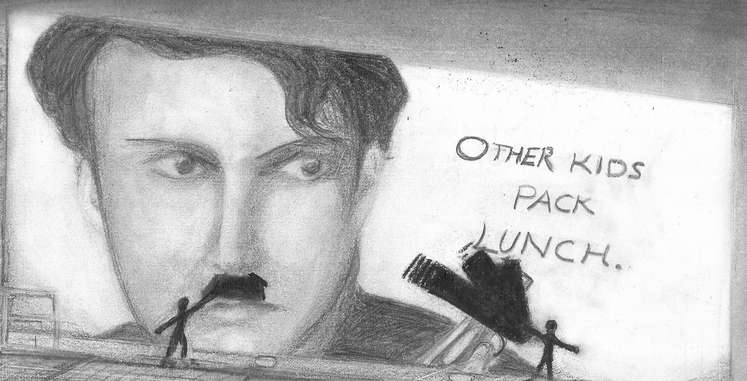 When the guard recognized who Depp was--and whose face Depp was painting on--he told him to hurry up and finish and left Depp and his friend alone.