19 LISTS Meanwhile, In Japan... What's going on in the land of the rising sun? Well, where do we start...

Way before there were wacky game shows like "Wipeout" and "Minute To Win It," there were a whole slew of bizarre shows running in Japan, including these, which are perhaps the all-time most messed up Japanese shows ever. We all know about the weird Japanese game shows where people have to fit themselves through a bizarre hole in a wall or fall into a pit of goo, but these gems take television to a whole new level.

From brutal public pranks on unsuspecting people (like making them think they are part of a shootout) to over-the-top stunts (like locking a man naked in an apartment until he can win his way out), clearly Japanese television is allowed to push the boundaries of common sense and good taste more than its American counterpart. The two styles of TV programming may be getting more alike in the future, as Japanese shows such as "Hey! Hey! Hey! Music Camp" continue to inspire similar shows for America, like the MTV series "Silent Library."

Data-driven recommendations based on voting from over 40 million monthly visits to Ranker. Try the free app
1
Slapped in the Balls

Clearly thought up by a woman scorned, "Slapped in the Balls" is a wacky Japanese game show in which men attempt to recite tongue twisters in a limited amount of time. As you may have gathered by now, should they fail by messing up the tongue twister or failing to get the words out in the allotted time, is a painful crack to the testicles. (Hey, it's a small price to pay for a new washer/dryer or a jetski when you think about it.)

This is definitely a concept they should start incorporating into US game shows. How much more fun would "Price is Right" be if, after spinning "The Big Wheel," contestants' nether regions were randomly set upon by a maniacal, screeching Drew Carey. I'd even set up my DVR to record that.

With a series name like "Panic Face King," it's easy to imagine that this hidden-camera show makes people flip out, but the lengths to which the series goes to achieve the titular shocked expressions are intense. One unsuspecting contestant learn this the hard way when he found himself in the crosshairs of a sniper. Thinking he's being filmed for a documentary about telephone fraud, this gentleman loses his mind when he sees the people he's been speaking with apparently taken out by a remote gunman.

When he's finally told that it's all part of the show, the man does not appear amused whatsoever. (Maybe the explanation is just part of the sniper's fiendish plot!) Let's hope he was paid enough to hire a good therapist after this traumatic incident.

In the United States, we have flashmobs, spontaneous gatherings of people organized on social media, meant to impress, irritate, or astound unknowing witnesses and passers-by. In Japan, occasionally these flashmobs are organized to target one specific individual, just to mess with them. Just like the title states, "Troop of 100" features 100 people who appear out of nowhere to chase an unsuspecting stranger on the street. (See, it's funny, because they think they are about to be assaulted!)

In cases where the troop actually catches the target, they celebrate by tossing the person up and down in the air, ritualistically, which may not necessarily make the victim feel all that much better, unless he has recently had a Bar Mitzvah and it brings back happy memories. Then, just as quickly as they arrived, the mob departs, leaving the target dazed and confused, but no worse for wear. Except for the lingering feelings of paranoia and mistrust that may take a lifetime to conquer. But hey, it was funny for 30 seconds, right? 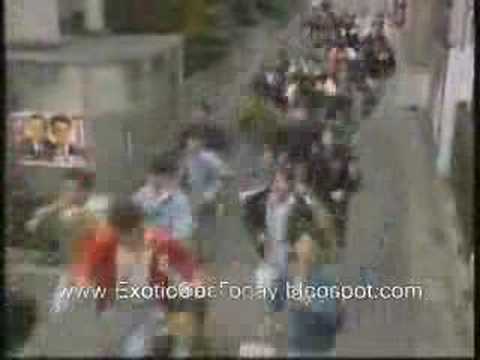 4
A Life Out of Prizes by Denpa Shonen

Making us wonder how they come up with these concepts, a comedian known as Eggplant appeared in the highly bizarre Japanese show "A Life Out of Prizes by Denpa Shonen" in the late 1990s. Eggplant was stripped naked and placed in an empty apartment, then filmed around the clock. While this sounds like a bad version of The Truman Show, it comes with a big catch. Eggplant was forced to win everything he needed during his stay, including food and clothing, by entering magazine contests.

One year after living with only the things he'd won, Eggplant reached the one million yen mark in prize winnings, which fulfilled the contract for the show. Producers were not going to allow him to leave that easily though, so they put him in a new apartment (naked, of course) and forced him to earn enough to cover his airfare back home. It's sort of like that Korean film Oldboy, only more twisted.

The Best Z-Ro Albums of All Time

The Best NFL Players From Ohio