24 LISTS These Go to Eleven The greatest, funniest, and most iconic movie and TV quotes from your all-time favorite comedies (and a few you probably haven’t seen).

You Ever Take It Off Any Sweet Jumps?
Karate in the Garage?
Bueller? Bueller?
Blessed Are the Cheesemakers
In the Hole
Needlenose Ned? Ned the Head?
That Rug Really Tied the Room Together
We're Going Streaking
Wetness Is the Essence of Beauty
Have You Seen My Stapler?
I Object!
Existence Is Pain
It's Got Electrolytes
Terry Loves Yogurt
SNL Bloopers
On Wednesdays We Wear Pink
You Stay Classy, San Diego
Pretty, Pretty, Pretty, Pretty Good
You Like Ice Cream?
Oh, Hi, Mark!
Photo: This Is Spinal Tap/Embassy Pictures

Just as with the films of his predecessor, James Bond, all of the Austin Powers movies contain a lot of memorable quotes - but the first is by far the most quotable of the bunch. Remember the first time you heard Austin utter "Groovy, baby?" Yeah, we do too. Check out some more of the best quotes from Austin Powers.

Dr. Evil: "Very well. Where do I begin? My father was a relentlessly self-improving boulangerie owner from Belgium with low-grade narcolepsy and a penchant for buggery. My mother was a 15-year old French prostitute named Chloe with webbed feet. My father would womanize, he would drink. He would make outrageous claims like he invented the question mark. Sometimes he would accuse chestnuts of being lazy. The sort of general malaise that only the genius possess and the insane lament. My childhood was typical. Summers in Rangoon, luge lessons. In the spring we'd make meat helmets. When I was insolent, I was placed in a burlap bag and beaten with reeds. Pretty standard really. At the age of 12, I received my first scribe. At the age of 14, an Zoroastrian named Vilma ritualistically shaved my t*******s. There really is nothing like a shorn s*****m, it's breathtaking I suggest you try it."

Yet another of Austin's nearly exhaustive efforts to shag with the lovely Agent Kensington. And yet another extremely popular catch phrase.
Should this be higher or lower?
3
Yeah, Baby!

Did Mike Myers know when he uttered this simple phrase that it would eventually find it's way into iconic pop culture status? Probably not. But it sure did. Yeah, baby, it sure did.
Should this be higher or lower?
4
Throw Me a Frickin' Bone Here!

Dr. Evil: "Gentlemen, I have a plan. It's called blackmail. The Royal Family of Britain are the wealthiest landowners in the world. Either the Royal Family pays us an exorbitant amount of money, or we make it seen that Prince Charles has had an affair outside of marriage and therefore would have to divorce!"
Number Two: "Prince Charles *did* have an affair. He admitted it, and they are now divorced."
Dr. Evil: "Right, people you have to tell me these things, okay? I've been frozen for thirty years, okay? Throw me a frickin' bone here! I'm the boss! Need the info."

Obviously Dr. Evil's behind the times, what with being frozen for decades and all. 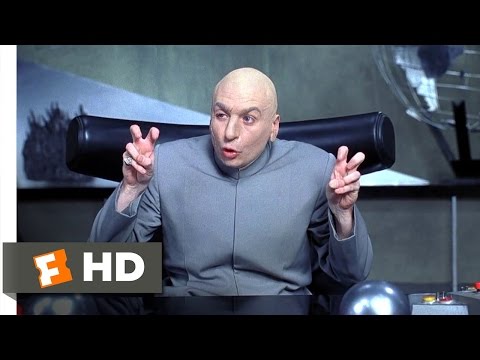 Should this be higher or lower?
LOAD MORE
Filed Under: Films FilmEntertainmentMovie Quotes
MORE POPULAR LISTS

The Best Actors Who Played The Flash

Legendary 'How I Met Your Mother' Fan Theories

Who Is The Most Famous Actor In The World Right Now?