The Mummy 2017 movie quotes help tell the story portrayed in the film about what happens when an ancient Egyptian princess's mummy is unearthed. The auction-adventure movie, a reboot of the Mummy movie franchise, was directed by Alex Kurtzman using a screenplay written by David Koepp, Christopher McQuarrie and Dylan Kussman based on a story by Jon Spaihts, Alex Kurtzman and Jenny Lumet. The Mummy 2017 opened in theaters on June 9, 2017.

In The Mummy, Nick Morton (Tom Cruise) unearths a tomb buried under the desert in Egypt for more than 2,000 years. Inside, Nick finds a mummy, which, along with scientist Jenny Halsey (Annabelle Wallis), Nick transports via military plane for examination. But strange things happen on the flight which lead to the plane crashing and Nick dying.

So later on, when Nick comes back to life in perfect health, the team, including Dr. Henry Jekyll (Russell Crowe) and Sergeant Chris Vail (Jake Johnson), begin to investigate why. It turns out, the mummy belonged to Princess Ahmanet (Sofia Boutella), a very powerful woman who was destined become Queen of ancient Egypt before she was mummified for her out of control actions. Now, the team believes Ahmanet is back and is trying to fulfill her destiny by taking control of the world.

1
It Takes a Monster to Defeat a Monster

Dr. Henry Jekyll: It takes a monster to defeat a monster.

Knowing that they're up against a monster, Dr. Jekyll believes that it will take an equal opponent to take that monster down. If only they had another friendly Egyptian princess with crazy-good super powers to fight with them.

Should this be higher or lower?
2
A New World of Gods and Monsters

Dr. Henry Jekyll: Welcome to a new world of gods and monsters.

Dr. Jekyll is certain that due to Nick's unearthing of Princess Ahmanet, the world has changed. New gods and monsters are there, and they're not exactly friendly. 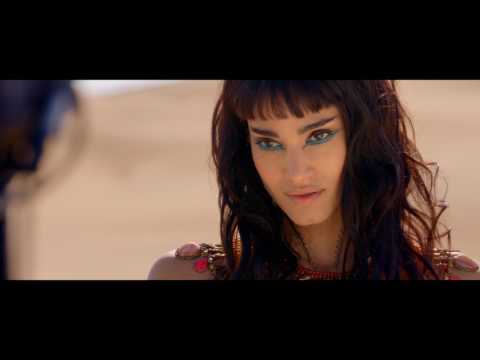 Should this be higher or lower?
3
A Being with Unimaginable Powers

Jenny Halsey: Legend has it, she's a being with unimaginable powers. Now she's using you to regain them.

Jenny shares more information about the mummy and her legend in this The Mummy 2017 movie quote. Princess Ahmanet had some wicked powers back in the day and is making her comeback through Nick.

Should this be higher or lower?
4
She Will Not Stop

Dr. Henry Jekyll: She will not stop until she has remade our world into her own.

Dr. Jekyll has a theory about what Princess Ahmanet wants now that she's been risen from the dead by Nick. As he notes, she once was set to take over the world and that is still her mission now.