9 LISTS Tom HanksLists that celebrate and rank the on-screen and real life performances of acclaimed actor Tom Hanks.
Filmmakers Gush About Hanks Wholesome Interactions with His Fans When He Didn't Play the Nicest Guy in the Room Ranking the Best Tom Hanks All His Love Interests, Ranked Every Malady He's Ever Played Favorite Romantic Comedy Roles Which THanks Character Are You? Watch Tom Hanks Pee and Pee
Photo:  Wikimedia Commons (CC-BY)

Tom Hanks is not just a man. He's not just an actor. He is, perhaps, one of the actual greatest guys on the planet. Seriously, he has Bill Murray levels of skill at showing up in unexpected places and doing delightful things. Besides playing some of cinema and television’s most enduring characters, nice Tom Hanks stories include ones where he posed with a passed out fan, taped an Emmy to the hood of a Mercedes, and got inducted into the Army Ranger Hall of Fame.

Tom Hanks good deeds also include returning a Fordham University student’s ID via Twitter, gifting the White House press corp with an espresso machine, and befriending an NYC cab driver. Tom Hanks is that good guy we can look to when other celebrities start disappointing us. He’s our rock. He’s good natured, charming, and fairly good at catching random soccer balls with Wilson’s face on them. He’ll jump into a Carly Rae Jepson music video. He’ll perform the perfect poetry slam about Full House. He’ll write “FU” on an autograph at a fan's request. And he’ll still have time to invent a typewriter app and make more movies.

When Bill Murray isn’t around to invade someone’s engagement photos, we’ve got Tom Hanks making a super fan’s day by showing her scrapbook some genuine love. He is the standard for aspiring celebs everywhere, and seems genuinely grateful for all that he has.

Tom Hanks will no doubt continue to fill the annals of history with good deeds and Hanksian antics. Here are some of the best moments so far.
1
When He Crashed a Newlywed Couple's Photo Shoot

In September 2016, Hanx crashed Elisabeth and Ryan's (last name undisclosed) post-wedding photo shoot in Central Park, NYC. American's most beloved thespian offered his congratulations, took some selfies, appeared in a few wedding photos, and merrily went on his way. Classic Hanks. Someone get that guy a Nobel Prize already.

Is this awesome?
2
That Time He Became Pals with a New York City Taxi Driver

In the fall of 2014, Hanks was performing on Broadway in Lucky Guy. When he got into a cab, the cabbie, Manny Anzalota, didn't place Hanks at first. “I look him in the eye, and I scream,  'WIIIIIIILLLSSSSSOOOOOOON!!!' And that really got him. He started laughing hard. He sees that I've got this Ferrari hat on, and a Ferrari shirt too, so he starts calling me 'Mr. Ferrari.' The whole ride, he keeps calling me 'Mr. Ferrari.' So after we get to his destination, we snap a quick photo, and he goes on his way.”

“Then one day I'm driving, and I get a text from one of the people that I'd driven, and it says: 'Mr. Hanks wants to invite you to see his Broadway show.' After the show, we're waiting for him in his dressing room, and he walks in and screams: 'Mr. Ferrari! And you wanna know the craziest thing? The name of his show was Lucky Guy. How crazy is that? Cause that was me. A lucky guy!” And unlike Bill Murray appearances, Tom Hank's unexpected drop ins are well documented. 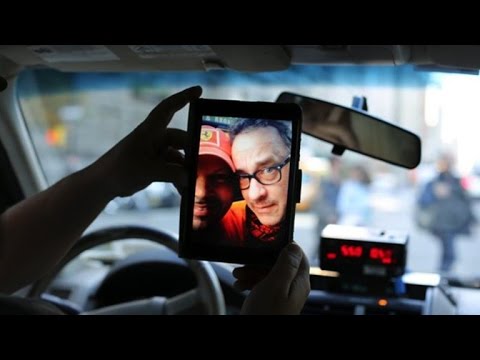 Is this awesome?
3
That Time He Helped Sell Girl Scout Cookies

Hanks and his son Truman were on their way to a typewriter shop when they spotted Girl Scouts selling their delicious cookies. Hanks bought four boxes and donated $20 on top of that. And then he hung out and took pictures with people who also bought cookies. At first the Los Altos Scout moms didn’t recognize Hanks because he was wearing the grand celebrity disguise of a baseball cap and sunglasses. But his familiar voice eventually got their attention. “I never realized how distinctive his voice is. It was right out of a movie,” an impressed mom said. And of course everything was shared on Twitter for posterity.

Is this awesome?
4
That Time He Found a Fordham University Student ID

On Oct. 6, 2015, Hanks found a student named Lauren’s student ID in a park. He took to Twitter to let her know he had it and his office would return it to her. That same day, Lauren’s friend Hannah recognized her friend and responded to Hanks.

Lauren didn’t have a Twitter account and found out via her professor that Hanks was looking for her. The lost ID landed her on Good Morning America. She explained to GMA that she lost it when she was on a run and after she pulled out her phone to take a selfie. Hanks eventually mailed the ID back with a note attached.