15 LISTS Religious Differences Fun facts and interesting trivia to know about religious beliefs and practices around the world.

What Do the Amish Believe?
Active Cults Around the World
Religious Panics in US History
Things to Know About Wiccans
Things to Know About Buddhism
Demons and Monsters in Buddhism
Weird Creation Myths from World Religions
The Beliefs of Hare Krishnas
Differences: Sunni vs. Shia Islam
Fringe Religions Around the World
The Very Hungry Breatharians
The World's Oldest Religion, Zoroastrianism
Shining a Light on Paganism
Religions in Video Games
The Best Newer Shows That Flirt with Religion
Photo: Granada Insider/Lazar-Gergo Photography

Many have tried it, few have succeeded. This is a list of the top American utopian experiments.

Over the years, people have tried to recreate a utopian world, much like that of the Garden of Eden before the fall. Utopian visionaries designed their own Plan B by uniting with a common ideology and breaking apart from mainstream society in attempt for the religious to reach their heaven-like home immediately. However, very few have ever succeeded – most went into debt and disintegrated just a few years after conception.

These are the trials and tribulations of these not-so-utopian utopias.
1
Oneida Community (1848)

His intention: Despite his mother’s religious devotion, Noyes found his own faith called Perfectionism, which was denied at Yale Divinity School. He was open-minded about it rather than repressive because he believed Jesus had already made his return and thus, people were sinless. This is the kind of rationale that gives birth to polygamy, which is exactly what happened in Noyes’ community. Needless to say, the group was persecuted and their "Moses" led them to Oneida.

Rules:
- "Complex Marriage" was one of Noyes’ teachings, which meant that every man was married to every woman in the commune. Any two people could have sexual relations, as long as it was consensual and, get this, nonexclusive... because that would be selfish and idolatrous. If an attachment began forming, they would be separated for a length of time.

- Another teaching was "Male Continence," a form of birth control in which the male was not allowed ejaculate during sex. If any members wanted to have children, they had to come before a committee who matched the parents based on their spiritual and moral traits.

- "Ascending Fellowship" meant older members, called Central Members, got first pick on virgins and would initiate virgins of both genders so they could not fall in love with each other or the younger members.

- Mutual Criticism subjected all members to criticism of their bad traits from the community, which could be a humiliating experience but was supposed to ensure morality. Noyes himself rarely volunteered for this activity, because he felt a community should not criticize its leader. Figures. 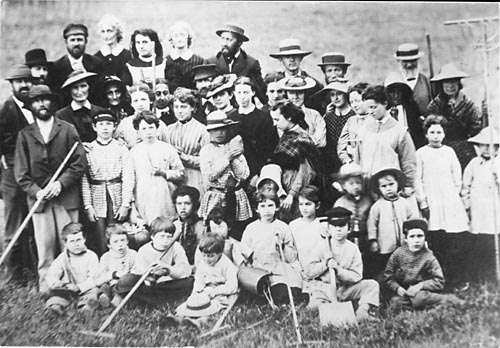 ﻿
Demise: Noyes was tipped off that there was a warrant out for his arrest, getting charged with rape, so he fled to Canada. The community dispersed, and many members were traditionally married by the next year. Oneida became a silverware company.
2
New Harmony, Indiana (1825)

Leader: Robert Owen
﻿
His Intention: Owen’s philosophy was that a person’s character is formed by his environment. He witnessed the beginning of the Industrial Revolution in Great Britain and disliked the living conditions of the working class, which was usually subjected to poverty, drunkenness, and little education. Owen constructed a moral environment in his experiment by making education central and labor equal to all members. His experiment in the New Lanark mill in Scotland reformed workers’ lives. He later headed to America.

- A group of renowned scientists and teachers were assembled from the U.S. and Europe

- Comprehensive education system for children, who could not work under the age of 10

- No private property was held. Instead, Owen instituted a system in which the amount of time a member had labored could be traded for commodities at a store that held that same amount of worth. Demise: Although his intentions were noble and he was ahead of his time, New Harmony failed because of Owen’s absence and its lack of unity. There were too many individual voices disputing the role of religion. He lost 80% of his fortune when the community dissolved after three years.
3
Shakers, United Society of Believers in Christ’s Second Appearing (1774)

Her Intention: Raised as a Quaker, Lee immigrated to America from England to escape persecution. She suffered four stillbirths, and her four living children all died before the age of 6. Her already self-conscious attitude toward sexuality turned to a strong dislike. Lee boldly preached as a woman, though many called her whore or witch, had prophetic visions, and claimed to be Christ’s spirit incarnate.

- Celibacy to prepare for God’s kingdom, which meant members were acquired through conversion and orphaned children

- Gender equality – They believed in a God made up of male and female elements. Traditional roles still implemented. Women cooked and wove, men worked in the farms

- Did not vote and were pacifists

- Convulsions during ritual prayer dances gave them their name, "Shakers" or "Quaker Shakers" Demise: For a society that cannot reproduce, the Shakers have lasted two centuries. At their peak in the mid 1800s, there were over 6000 Shakers, but as of 2012, there were just three, and the village itself is a museum.
4
Brook Farm (1841)

Leader: George Ripley
﻿
His intention: Ripley, a former Unitarian minister, was inspired by the transcendentalist movement and believed that if labor was shared amongst all the residents, they could have leisure time for scientific and literary pursuits in order to cultivate both their bodies and minds. The farm in Massachusetts was purchased through Ripley’s joint stock company, which promised a 5% profit return to each investor.

- They received equal compensation no matter their age or class standing

- There was something close to gender equality, but mostly because there were very few couples. Most members were young and single

- Pleasure was a priority, and music, dance, book clubs, and performances of Shakespeare plays were common

Demise: The farm fell into deep debt because members weren’t paying their share, causing food to become scarce. Also, Ripley began to transition to new socialist concepts for the community, called Fourierism, which limited the freedom it had originally given its members. It led to the ambitious construction of a housing unit, the Phalanstery, when it caught fire. Uninsured, it took Ripley 13 years to pay off the debt and he supposedly said "I can now understand how a man would feel if he could attend his own funeral." The community completely shut down in 1847 and was later used as an orphanage for a Lutheran church.
LOAD MORE
Filed Under: Popular HistoryAmerica
MORE POPULAR LISTS

The Best 'Monk' Episodes of All Time

the dating game episodes, top sandals brands in the world, if you leave lyrics, time bandits cast, best movies out on dvd, glass movie 2018, current issues in american government, paradise lost best album, born in 1992 how old in 2019, i miss you song