27 LISTS That's Just SciencePsst! Hey, kid: wanna see something cool? Check out these lists of neato facts, pics, and vids of science working around you, all day in every way.
Scientific Facts That Will Ruin Movies for You 2019's Biggest Scientific Breakthroughs Weird Unexplained Scientific Anomalies Very Cool Chemical Reactions Fascinating Things Learned from Twin Studies Silly Science in Movies That Could Actually Happen The Weirdest Experiments to Get Funding Concepts You Were Taught Incorrectly Cool Things Seen Through a Microscope Circadian Rhythms in Plants and Animals Keep Your Ion the Prize How Animals See the World Terms You're Using Wrong Fun Physics Experiments You Should Try Awesome Tattoos on Science Nerds Weird Real Units of Measurement Cool Things to Know About Light Studies About Popular TV Shows Reasons to Care About Climate Change Songs About Science
Photo: Domeckopol

Ever wonder about some of  the biggest science myths that everyone believes? Then this list of the top 10 science myths is for you. Can a penny dropped from a tall building really kill a pedestrian? Is there gravity in space? Is a meteor fiery because friction produces heat?

This list tackles common scientific myths and should debunk any silly yet accepted theory you've heard before because the ones listed here simply aren't true. Here is a list of the top 10 most common science myths.

1
There Is No Gravity In Space 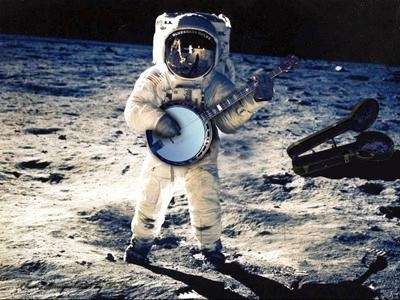 A very common image in everyone's brain is an astronaut jumping around on the moon like it was a trampoline in his backyard. Bouncing around in space without a care, and without gravity. But that's a load of bull because there is gravity in space – a lot of it. The reason that astronauts appear to be weightless is because they are orbiting the earth. They are falling towards the earth but moving sufficiently sideways to miss it.

Part of me is convinced that astronaut training is just a bunch of guys in a room reading Douglas Adams, at the heart of this theory is what Adams says is the knack to flying, "The knack lies in learning how to throw yourself at the ground and miss. That is, it's going to hurt if you fail to miss the ground. Most people fail to miss the ground, and if they are really trying properly, the likelihood is that they will fail to miss it fairly hard." So, basically astronauts figured out how to fly in space and that makes them even cooler than they already were.

But I digress, another interesting fact is that when a shuttle reaches orbit height (around 250 miles above the earth), gravity is reduced by only 10%, which means space is like being in a bounce house 24/7. There is still gravity in a bounce house and there is gravity in space.
2
Lightning Will Never Strike The Same Place Twice 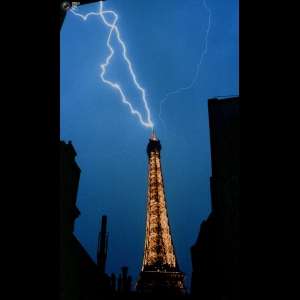 What a bunch of hogwash! Lightning does strike the same place twice – in fact it is very common. This one is all about common sense, lightning does favors certain areas such as high trees or buildings. The reason being that they are tall and easy to strike, simple right? So, in a large field, the tallest object is likely to be struck multiple times until the lightning moves sufficiently far away to find a new target. The Empire State Building gets struck around 25 times a year. So take that cliched proverb!
3
Meteors Are Heated By Friction When Entering The Atmosphere 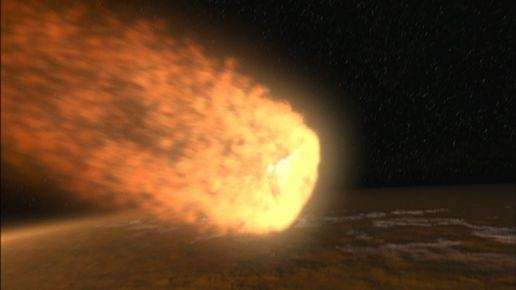 Anyone who as ever been cold has rubbed their hands together to generate warmth. The rubbing of two objects together creates friction which in turn produces heat. It would make sense to think that when a meteoroid comes crashing into earth it's friction that makes it turn into a fireball, but that's not true. When a meteoroid enters the atmosphere the speed compressing the air in front of the flying object that causes it to heat up. Just like with your hands the fast your move them the more it heats up. The pressure on the air generates a heat intense enough to make the rock so hot that is glows bright enough for our viewing pleasure.

Another myth is that meteors are hot when they hit the earth. Meteorites are almost always cold when they hit – and in fact they are often found covered in frost. This is because they are so cold from their journey through space that the entry heat is not sufficient to do more than burn off the outer layers.
4
A Penny Dropped From A Tall Building Can Kill A Person Walking Below 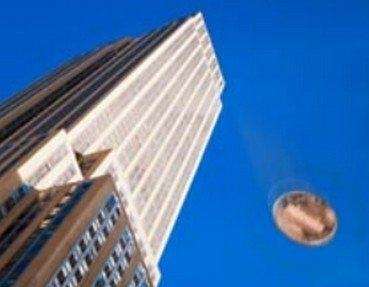 The myth is if you drop a penny from the top of a tall building (like the Empire State Building) – it will gather up enough speed to kill a person if it lands on them.The fact is, the aerodynamics of a penny ain't that great, it's like putting a spoiler on a Honda...Hollywood can pretend Civics's are racing cars but it's still a Honda. A penny dropped from a really high place is just a penny what would happen in reality is that the person who gets hit would feel a sting which is pretty anti-climactic. So if you're planning on offing a bunch of people with pennies, you may want to head back to the drawing board.
LOAD MORE
Filed Under: Space Missions ScienceSpaceMythsThe Space Page
more popular lists
Button Mash 1.3k voters 19 Must-Have Snacks for Gamers Nachos is rising to #9 Game of Thrones 2k people have voted on How the Cast of Game of Thrones Aged from the First to Last Season Songs 644 people have voted on The Best Songs with World in the Title Button Mash 23.6k people have voted on The Most Popular Mobile Games Right Now