42 LISTS The Walking DeadIt's the final season of AMC's hit show, adapted from a comic book series, about life for survivors of an actual zombie apocalypse.
Easter Eggs You Didn't Notice Infuriating Little Details Pet Peeves That Annoy All Fans How the Comics Finally(!) End Characters: TV vs. Comic Books The Showmakers' Worst Decisions The Most Brutal & Badass Kills Things That Would Improve the Show Other Shows & Films TWD Fans Should Watch Fun Facts All Fans Should Know Memes & Viral Things Comic Scenes Too Graphic for TV The Best Daryl Dixon Moments Comic Book Differences The Most Gruesome Deaths So Far Gross Things the Living Have Eaten What You Need to Know About the Whisperers Objectively Bad Decisions Made by Survivors What O.G. Fans Hate About the TV Adaptation The Actors Out of Their Zombie Fighting Clothes
Photo:  The Walking Dead / AMC

On this hilltop, you can see SPOILERS everywhere. This list discusses events from The Walking Dead up to the end of season six, so check back in when you’re caught up.

The Walking Dead fan theories: everybody’s got ‘em. Some are steeped in the original comics. Others were born on late night Reddit threads. Many fan theories are totally plausible in this Robert Kirkland and Scott Gimple (by way of Frank Darabont) world. Others are delightfully ridiculous. But if you’re a fan of the show, comics, or both, The Walking Dead conspiracy theories are part of the deal.

Some of these theories about The Walking Dead have been disproven now that the comic series has ended, but that doesn't make them any less fun. For example: Is Rick immortal, the leader of a blood-thirsty gang, or making all of this up inside his comatose brain pan? Will Negan kill Maggie, Daryl, or finally get around to Glenn as depicted in the comics? Or will he kill someone else entirely? Maybe Carol, Abraham, or Morgan?

There's lots to ponder, for sure. As the seasons wear on, fan theories about The Walking Dead characters shift and change. Are Rick and Co. the good guys or the bad guys? Will Carl survive into old age to tell the next generation about the world before? Check out these popular Walking Dead fan theories before Negan gets here and all hell breaks loose.

back to page 1
5
It Was Just All Rick’s Coma Dream
We’ve been watching this crazy world from inside Rick’s fevered brain as he lies in a coma. All of the characters in the world work at the hospital. Hershel’s the doctor. Maggie is a nurse. Daryl is probably a patient in the bed next to Rick’s. Carol is a badass surgeon. The hospital food is worthy of Terminus, etc.

Kirkman debunked the theory on Twitter saying, “Rick is NOT still in a coma. The events of TWD are definitely happening.” But he did fling this fan theory pizza up on the roof about Carl. "He actually NEVER found his family. He’s been crazy since he killed his first zombie. #joking?”

Is this plausible?
6
The Walking Dead Is a Study in Human History, Hobbesian Theory
As Redditor zeptimius sees it, Robert Kirkman is simply retelling the history of mankind. "My pet theory is that the makers of TWD are retelling human history through the series. I offer the follow [sic] clues: The farm in season two represents the invention of agriculture and the end of the hunter-gatherer lifestyle (note the hunting accident that triggers it). Woodbury in season three represents the Roman Empire, complete with gladiator games and an insane, cruel guy at the top.

The deadly epidemic in season four represents the Black Death and the Middle Ages. Alexandria represents the aristocracy of the 17th century, living in luxury but oblivious of the harshness of the world ‘out there.’ The only thing that doesn't really fit is Terminus. What do you make of this idea?”

That’s where the Hobbesian theory comes in. In response to the horrors that were done to them, the Terminates began to terrorize and cannibalize others, to rule absolutely so as not to be victims again. Kind of like where Rick and the crew are in Season 6.

Is this plausible?
7
Everyone Is Hearing Impaired and Can’t Hear Walkers Or Other Dangers Coming
You’d think Michonne and Daryl would have excellent hearing because they mainly use a katana crossbow, but since Daryl picked up a rocket launcher in Season 6, and Michonne has had to use just as many firearms as the others, this theory about hearing loss may be accurate. What else explains the fact that the group doesn’t hear invaders or huge Walker herds before it’s too late?

Redditor f*ckyoubarry says, “In The Walking Dead, Walkers can get so close unnoticed because the main characters are all suffering from a large amount of hearing loss from repeatedly firing off guns without hearing protection.” Or repeated thwacking Walkers until their own ears ring. 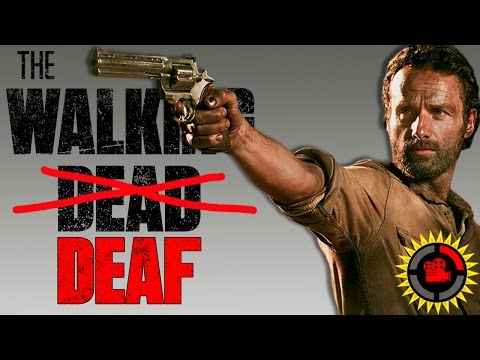 Is this plausible?
8
A Cure Is Found - Fat Lot of Good It’ll Do Rick and the Crew
This fan theory states that there is a cure, but it’s just going to take a while to distribute. Getting to all of the survivors may take a while. And then the cure may not fix the issue of when we die, we turn. Redditor MichaeljBerry suggests, “Basically, and I'm thinking in a science fiction way here, long term people would have to get some kind of device implanted in them that fries their brain when their heart stops.” Until then, Rick has Michonne to lop off his head if he dies in his sleep.