42 LISTS The Walking DeadIt's the final season of AMC's hit show, adapted from a comic book series, about life for survivors of an actual zombie apocalypse.
Fan Theories to Think About The Most Brutal & Badass Kills Comic Book Differences Easter Eggs You Didn't Notice Characters: TV vs. Comic Books How the Comics Finally(!) End Comic Scenes Too Graphic for TV Fun Facts All Fans Should Know Carol Kicking So Much Ass Other Shows & Films TWD Fans Should Watch The Showmakers' Worst Decisions Pet Peeves That Annoy All Fans Things That Would Improve the Show The Best Daryl Dixon Moments What You Need to Know About the Whisperers What O.G. Fans Hate About the TV Adaptation Gross Things the Living Have Eaten The Strongest Survivors Infuriating Little Details Greatest Episodes
Photo:  The Walking Dead / AMC

He lived passed his days in the comics, but it was still hard to see the ginger warrior go out at the end of Negan's bat. At least he got out a solid "S*ck my nuts" to Negan before getting struck out.

Was this gruesome?
2
Glenn Struck Down By Cowardly Nicholas And Walkers 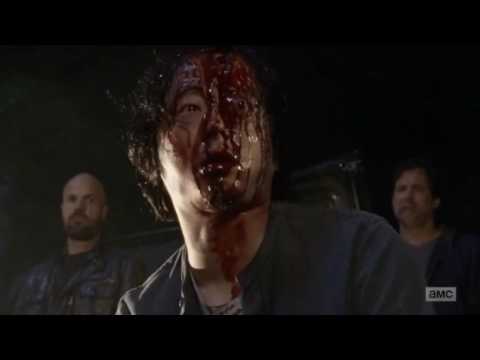 Was this gruesome?
3
Noah Taken Out By Nicholas, Who Doesn't Know How Revolving Doors Work

Noah, who saved Beth and was a solid addition to the group, gets torn apart by walkers because Nicholas is awful. Glenn has to watch.

Was this gruesome?
4
Jessie And Her Kids Go Out With A Chomp, A Bang, And A Slice

With Sam, we saw this one coming. What we didn't see coming was that the rest of Porch D*ck's family would go with him. Carol's prophecy of being walker food gets in Sam's head. He hesitates, gets chomped on. Then his mother gives up and backs into some walkers. Then Ron turns his gun on Carl and fulfills a comic book storyline where he gets his right eye shot out.

The most stone cold thing in this moment is Michonne running Ron through with her sword.