22 LISTS Behind the ScenesLists of fun facts and fascinating photos from production on your favorite films, TV shows, and more.
Production Feuds That Changed Films Set Photos from Huge Movies Famous Movie Props: Before and After Actors Who Swiped Movie Props Actors Replaced by CGI The Darkest Film Shoots in History Tragedies on Reality TV Sets Props Used in Multiple Movies Scary Horror Villains In and Out of Makeup Bad Guys and Villains On-Set Insane Stories from Horror Movie Sets How Directors Made Actors Cry On the Sets of '90s Flicks Pics of Actors Taking a Break On-Set Pranks Rare Audition Tapes Behind the Scenes of Iconic TV Shows Prosthetics, Props & Costumes Miniatures on Movie Sets Cool People Hanging Out
Photo: Lucasfilm/Disney

Let’s look at women's movie roles intended for men. Somewhere along the way in the development process, filmmakers have switched male roles to female, giving the world some of the most iconic screen characters of all time. Could you imagine Ripley in the Alien franchise as a man? How about Paula in the The 40-Year-Old Virgin?

Sigourney Weaver has played three roles that were intended for men. Glenn Close insisted that her character in The Paper stay the same, including a fistfight with Michael Keaton’s character. Starbuck from Battlestar Galactica is still a sexual, cigar-smoking fighter pilot, she’s just got ovaries. Game of Thrones chieftain Karsi showed us that Wildling leaders can be female or male because it doesn’t matter when you’re facing off with White Walkers.

Even back in 1940, director Howard Hawks made the bold choice of making a prominent character in his screen adaptation of The Front Page a female. Now, we can’t imagine His Girl Friday without Rosalind Russell as Hildy Johnson.

Helen Mirren and Dame Judi Dench have taken on roles previously played by men. Mirren’s Hobson in the remake of Arthur was just as deadpan and engaging as Sir John Gielgud’s. Dench’s M appeared in Bond films.

Women in film may face many challenges when it comes to pay, but hats off to the directors, writers, actors, and producers who create opportunities for women who are more qualified to play authority figures, villains, and tough characters rather than, say, damsels in distress or run-of-the-mill wives, girlfriends, or best friends.

What are your favorite male-to-female film roles? Upvote those you are most glad went to a female actress.

1
Ellen Ripley In The 'Alien' Series, Played By Sigourney Weaver

Weaver made Ripley one of the most iconic scifi characters to date. When Ridley Scott changed Ripley to a woman, he changed very little. Running from an acid-spitting alien pretty much takes wits, toughness, and knowing the ship corridors and hiding places by heart. Weaver added a whole new dimension to the character, which exponentially increased with each film.

This is all despite Scott's sort of sexist comment on his creating Ripley: “I just had a thought. What would you think if Ripley was a woman? She would be the last one you would think would survive - she’s beautiful.”

Glad this was played by a woman?

Dench has played M in eight Bond films. Before Dench, M was played by Bernard Lee and then Robert Brown. Ralph Fiennes picked up where Dench left off.

When she learned that her time in the role would wrap up after Skyfall (she then made a cameo in Spectre), Dench wasn’t thrilled. “They told me gently and I laughed through my tears. Seven films is a long time. But MI6 would have given her the push by now, don't you think?”

Glad this was played by a woman?

3
Paula In 'The 40-Year-Old Virgin,' Played By Jane Lynch

Jane Lynch owes this role to Steve Carell’s wife. Comedian and actor Nancy Walls told Carell that there should be more women in the movie. So, the store manager was changed from male to female. The role wasn’t just handed to Lynch, though; she had to earn it.

While improvising with the other actors, she nailed the part. She also added a new dimension to sexual harassment in the workplace. 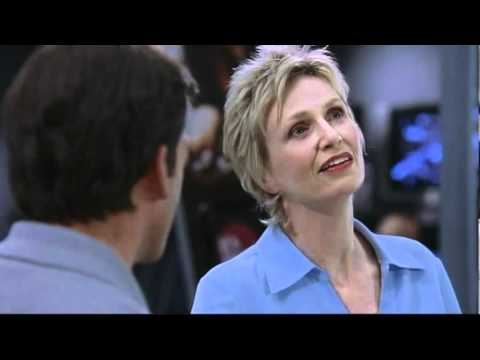 Glad this was played by a woman?
4
Karsi In 'Game Of Thrones,' Played By Birgitte Hjort Sørensen

She only appeared in one episode in Season 5, but Karsi left an impression with viewers. In “Hardhome,” Sorensen’s clan chief and Wilding elder is tough and ready to kick White Walker butt. Miguel Sapochnik, who directed the episode, said that Karsi was originally written as a man.

They wanted to show another dimension to the Wildling plight as the dark forces closed in on the north. When the warrior and mother faces off with White Walker children, the end result is powerful.