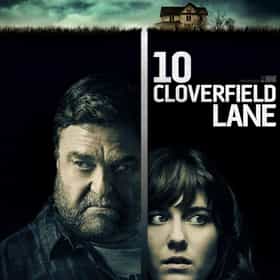 10 Cloverfield Lane is a 2016 American science fiction psychological thriller film directed by Dan Trachtenberg. The film was developed from a script titled The Cellar, but under production by Bad Robot, it was turned into a spiritual successor of the 2008 film Cloverfield. The film follows a young woman (Mary Elizabeth Winstead) who wakes up in an underground bunker with two men who insist that an event has left the surface of Earth uninhabitable. ... more on Wikipedia

10 Cloverfield Lane is ranked on...

#478 of 770 The Best Horror Movies of All Time 1M VOTES Horror movies, ranked by adrenaline junkies worldwide. Anyone can vote on this CrowdRanked list, and can even add your own f...
#10 of 177 The Very Best Movies of 2016, Ranked 23.7k VOTES Hilarious comedies, thrilling superhero adventures, and engaging dramas comprise the very best films of 2016. The best 2016 ...
#72 of 113 The Best Intelligent Horror Movies 664k VOTES If you think horror movies are nothing more than slashers slashing, supernatural creatures wreaking havoc, and gallons of th...
#71 of 106 The Greatest Directorial Debuts Of All Time 5.5k VOTES Believe it or not, some of the greatest films of all time were also some of the greatest directorial debuts to date. It...
#5 of 13 Underrated Horror Sequels That Are Way Better Than You've Heard 1.2k VOTES From tales of masked, knife-wielding men to gory accounts of water-averse monsters with dietary restrictions, horror is one ...
#17 of 25 What to Watch If You Love Lost 629 VOTES If you’ve just finished binge watching Lost, you’re probably wondering about other shows like Lost. What’s next? While nothi...
#40 of 46 35+ Great Movies That Blur the Lines Between Horror and Drama 2.4k VOTES Some of the creepiest movies of all time blur the line between horror and drama through disturbing storylines. The top drama...
#7 of 20 Horror Movies That Don't Look Like Horror Movies 2.7k VOTES A lot of factors go into making a horror movie truly scary, but don't discredit how visuals and sound play into the narrativ...
#25 of 113 The Best Movies About Disease Outbreaks 33.8k VOTES A list of the best movies with disease outbreaks. Are you a fan of movies about scary infections and crazy medical pandemics...
#2 of 28 The Best Horror Movies of 2016 3.4k VOTES Kill-crazy clowns, demented hermits, and legendary haunts all appear in the best horror movies of 2016. The scariest 20...
#29 of 74 The Most Anticipated Movies of 2016 64.6k VOTES If 2015 taught us anything at the movies, it’s that big budget flicks are just as popular as ever. A total of 61 films gross...
#6 of 23 23 Super Awesome Horror Movies On Hulu You Can Watch Right Now 1.2k VOTES The full moon is peaking from behind a cloud, a raven caws in the night, and you’ve spoken the wretched spell/logged into Hu...
#45 of 54 The Worst Movies of 2016 10.2k VOTES Action comedies, films based on video games, and melodramatic dramas are all among the worst movies of 2016. The worst movie...
#4 of 51 The Best Directorial Debuts Since 2010, Ranked 431 VOTES While it may be surprising, some of the best films released since 2010 were directorial debuts. Sure, every famous director ...
#7 of 13 Memorable T-Bone Car Crash Scenes In Movies, Ranked 91 VOTES We all love a good, old-fashioned film cliche - don't we? There's something sort of comforting when an oft-used trope comes ...
#10 of 114 The Best New Horror Movies of the Last Few Years 19.8k VOTES The best new horror films find a lot of different ways to scare audiences. They offer ghosts, witchcraft, creepy clowns, spa...
#3 of 86 The Best New Thriller Movies of the Last Few Years 2.4k VOTES It's time to vote on the best new thriller films. Audiences have long enjoyed the pleasure of going to a movie for suspense ...
#14 of 61 The Best New Sci-Fi Movies of the Last Few Years 6.7k VOTES Modern science fiction movies provide audiences with a wide range of subject matter. The genre offers a lot of flexibil...
#28 of 127 The Best Horror Movies Of The 2010s, Ranked 32.3k VOTES These horror films from the 2010s have got the best scares, screams, and monsters of the decade. Jordan Peele came onto the ...
#33 of 107 The Best Thrillers Of The 2010s Decade 4.8k VOTES What are the best thriller movies of the decade? That's what this list will determine with help from you. Below, you'll...
#4 of 44 The Best Disaster Movies of the 2010s 1.3k VOTES The best disaster movies from the 2010s span across all genres on this list. But most of these disaster films from the 2010s...
#16 of 20 20 Movies to Show Your Kids to Get Them into Horror 17.3k VOTES It's perfectly natural to want to share your interests with your kids, but what if you're a horror buff with a stockpile of&...
#38 of 89 The Best Sci Fi Thriller Movies, Ranked 8.5k VOTES This list contains information on the best sci-fi thriller movies, ranked from best to worst by user votes. The best sci-fi ...
#43 of 55 The Best Monster Movies of the Modern Era 5.1k VOTES This list contains information on the best modern monster movies, ranked from best to worst by user votes. The best films ab...
#20 of 26 The Best Intelligent Alien Movies of All Time 19.2k VOTES Aliens are often depicted as intelligent life forms, yet a great deal of alien movies from the past don't necessarily warran...
#6 of 20 20 Movies to Show Your Kids to Get Them into Thrillers 329 VOTES A quality thriller can be the kind of film that stays with you for months, even years, so it's understandable that cinephile...
#14 of 102 The Best John Goodman Movies 3.5k VOTES List of the best John Goodman movies, ranked best to worst with movie trailers when available. TV fans may known John Goodma...