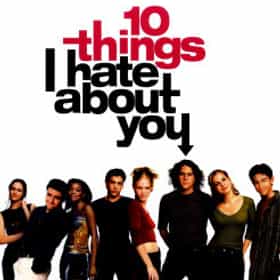 10 Things I Hate About You is a 1999 American teen romantic comedy-drama film. It is directed by Gil Junger and stars Julia Stiles, Heath Ledger and Joseph Gordon-Levitt. The romantic comedy screenplay was written by Karen McCullah Lutz and Kirsten Smith. The film, a modernization of Shakespeare's The Taming of the Shrew, is titled after a poem written by the film's female lead to describe her bittersweet romance with the male lead. The film was released March 31, 1999, and it was a breakout success for stars Stiles, Ledger and Gordon-Levitt. ... more on Wikipedia