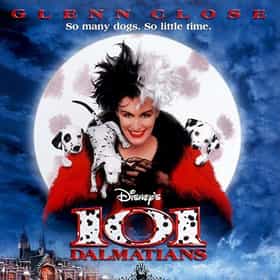 101 Dalmatians is a 1996 family comedy film written and produced by John Hughes and directed by Stephen Herek. It is the second adaptation of Dodie Smith's 1956 novel The Hundred and One Dalmatians produced by Walt Disney Pictures following the 1961 animated film of the same name. It stars Glenn Close as the iconic villainess Cruella de Vil, and Jeff Daniels as Roger and Joely Richardson as Anita, the owners of the 101 dalmatians. In 2000, a theatrical sequel was released titled 102 Dalmatians with Glenn Close and Tim McInnerny reprising their roles. ... more on Wikipedia