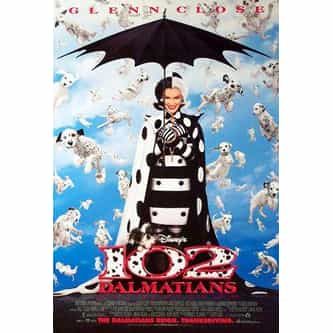 Tagline
A spotless new tail is going to be unleashed.

102 Dalmatians is a 2000 family comedy film directed by Kevin Lima in his live action directorial debut and produced by Walt Disney Pictures. It is the sequel to the 1996 film 101 Dalmatians and stars Glenn Close reprising her role as Cruella de Vil as she attempts to steal puppies for her "grandest" fur coat yet. Glenn Close and Tim McInnerny were the only actors from the first film to return for the sequel. The film was released on VHS and DVD on April 3, 2001, and re-released ... more on Wikipedia

102 Dalmatians IS LISTED ON