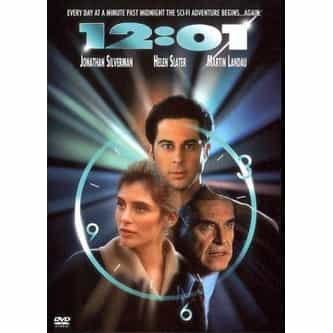 12:01 is a 1993 science fiction television film directed by Jack Sholder, and starring Helen Slater, Jonathan Silverman, Jeremy Piven, and Martin Landau. It originally aired on the Fox Network in the United States. It is an adaptation of Richard Lupoff's short story "12:01 PM," published in the December 1973, issue of The Magazine of Fantasy & Science Fiction. The story had previously been adapted into the 1990 short film 12:01 PM starring Kurtwood Smith. ... more on Wikipedia