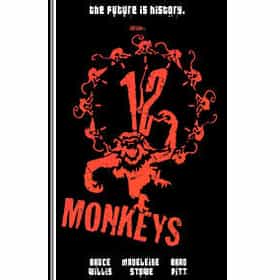 12 Monkeys, also known as Twelve Monkeys, is a 1995 American science fiction film directed by Terry Gilliam, inspired by Chris Marker's 1962 short film La Jetée, and starring Bruce Willis, Madeleine Stowe, and Brad Pitt, with Christopher Plummer and David Morse in supporting roles. After Universal Studios acquired the rights to remake La Jetée as a full-length film, David and Janet Peoples were hired to write the script. Under Terry Gilliam's direction, Universal granted the filmmakers a US$29.5 million budget, and filming lasted from February to May 1995. The film was shot mostly in Philadelphia and Baltimore, where the story was set. The film was released to critical ... more on Wikipedia

Behind-The-Scenes Stories From '12 Monkeys' 2.1k views The 1995 cult classic 12 Monkeys demonstrates that the right combination of the most unexpected elements can turn into a gre...
The Best Quotes From 'Twelve Monkeys' 113 votes The best quotes from Twelve Monkeys make you realize how great the movie really is, even if you haven't seen it in a while. ...