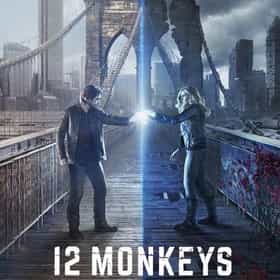 12 Monkeys (SyFy, 2015) is an American television series on Syfy created by Terry Matalas and Travis Fickett, and loosely based on the 1995 film. In the year 2043, scavenger James Cole (Aaron Stanford) has been recruited by a team of "Project Splinter" scientists led by physicist Katarina Jones (Barbara Sukowa), to travel back in time to the year 2015 to stop the release of a virus by the enigmatic organization known as the "Army of the 12 Monkeys". ... more on Wikipedia