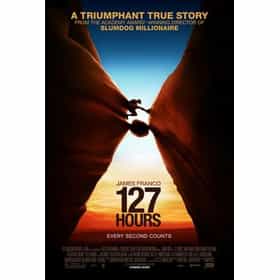 127 Hours is a 2010 British-American biographical survival drama film directed, co-written and produced by Danny Boyle. The film stars James Franco as real-life canyoneer Aron Ralston, who became trapped by a boulder in an isolated slot canyon in Blue John Canyon, southeastern Utah, in April 2003. The film was a co-production of the United Kingdom and the United States. The film, based on Ralston's memoir Between a Rock and a Hard Place, was written by Boyle and Simon Beaufoy, produced by Christian Colson and John Smithson and the music was scored by A. R. Rahman. Beaufoy, Colson and Rahman had all previously worked with Boyle on Slumdog Millionaire. The film was well received by ... more on Wikipedia

The True Story Of '127 Hours' Where A Man Cut Off His Own Arm To Survive 59.7k views If you've ever used the term "between a rock and a hard place," you may want to rethink it. That is, unless you've...

#141 of 211 The Best Adventure Movies 77.3k VOTES List of adventure movies. What are the best adventure movies? If you're a thrill-seeking, adrenaline-obsessed movie-goer, th...
#2 of 15 The Most Stomach-Churning Moments Of Body Horror Of The 2010s 3k VOTES There's something about body horror that makes your skin crawl, possibly because nearly everyone watching can relate. There'...
#5 of 15 Movies That Will Drive Anyone With Claustrophobia To The Edge 3.2k VOTES Plenty of horror films have been described as "claustrophobic" over the years, but for people who actually experie...
#5 of 45 The 35+ Best Drama Movies About Survival 1.8k VOTES Whether facing the apocalypse, zombies, or a vast open ocean, characters in the best survival drama movies all share an undy...
#12 of 24 The Best Survival Movies Based on True Stories 1.5k VOTES There are hundreds if not thousands of movies about survival, but only a choice few are based on true events. The survival m...
#18 of 26 The Best Films About Climbing 847 VOTES What are the very best  climbing movies? This is a list of them ranked from best to worst by user votes. The best climb...
#9 of 14 The Best Movies That (Mostly) Take Place In A Single Location 581 VOTES A single-setting movie has the unique challenge of using a geographic restriction as a source of inspiration. Whether they'r...
#8 of 10 Oscar Nominations 2011: Rank The Best Picture Oscar Nominees 617 VOTES The 2011 Academy Awards feature 10 Oscar nominees competing for the 'Best Picture' Oscar. The Oscar nominations in this cate...
#83 of 245 The Greatest Movies Of The 2010s, Ranked 41k VOTES You have a very important task ahead of you - voting for the best movies of the 2010s. While that may sound easy on the surf...
#3 of 165 The Very Best Survival Movies 21.1k VOTES A list of the best survival movies. All of the best survival films have been included, but if you feel we somehow missed one...
#162 of 216 The Best R-Rated Drama Movies 8.5k VOTES List of R-Rated drama movies, ranked from best to worst with movie trailers when available. This list takes the best R-Rated...
#177 of 228 The Best Biography Movies 2.3k VOTES A list of all the best biography movies ever made, many of which are streaming on Netflix and Amazon Prime. This biopic movi...
15 Movies That Made Audiences Puke, Pass Out, Leave the Theater, or Pass Away 744.7k VIEWS Have you ever watched a movie that made you physically sick? Perhaps a horror movie was too gory, or a film was ma...
#23 of 41 The Best Movies About Not Giving Up 1.8k VOTES There’s nothing more inspirational than hearing a story of a person surviving against all odds, holding on to hope with all ...
#2 of 87 The Best James Franco Movies 5.2k VOTES List of the best James Franco movies, ranked best to worst with movie trailers when available. At the beginning of his actin...
#5 of 29 The Best Movies That Have Only One Actor (Most of the Time) 1.2k VOTES This list contains information on the best movies with only one actor, ranked from best to worst by user votes. The best one...
#2 of 41 The Best Recent Survival Shows & Movies 870 VOTES Survival shows and movies are often prime examples of exactly what we don't want to happen in life—like washing up on a dese...
#9 of 56 The Best Treat Williams Movies 675 VOTES Here is a list of the best Treat Williams movies, ranked best to worst. Treat Williams's highest grossing movies have receiv...
#5 of 15 The Best Movies Directed by Danny Boyle 701 VOTES List of all movies directed by Danny Boyle ranked from best to worst with photos. Films directed by Danny Boyle are listed h...
#2 of 50 The Best Drama Movies of 2010 452 VOTES List of the best 2010 drama movies, ranked by how many upvotes they've received by other fans of the genre. Some of the movi...
#3 of 140 The Best Movies From Pathé, Ranked 669 VOTES Here is a list of all the movies that are produced by or distributed by Pathé, such as Chicken Run, Bright Star, and ...