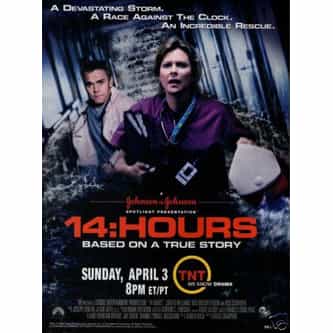 14 Hours is a 2005 medical emergency docudrama produced for the TNT Network and starring JoBeth Williams. The film was set in Houston, Texas and filmed in Vancouver, Canada. Based on true-life events surrounding Tropical Storm Allison in 2001, the film was released internationally on DVD by Paramount Pictures. 14 Hours was produced through Cosmic Entertainment, which counts Kurt Russell, Goldie Hawn, Oliver Hudson and Kate Hudson as its principals, and sponsored by Johnson & Johnson. ... more on Wikipedia

14 Hours IS LISTED ON