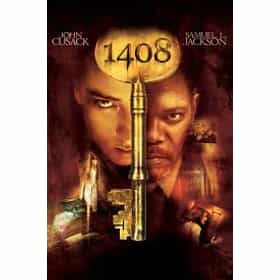 1408 is a 2007 American psychological horror film based on the Stephen King 1999 short story of the same name directed by Swedish director Mikael Håfström. The movie stars John Cusack, but also includes Samuel L. Jackson and Mary McCormack. The film was released in the U.S. on June 22, 2007, although July 13 is mentioned as the release date in the trailer posted on the website. The film follows Mike Enslin, an author who specializes in the horror genre. Mike's career is essentially based on investigating allegedly haunted houses, although his repeatedly unfruitful studies have left him disillusioned and pessimistic. ... more on Wikipedia