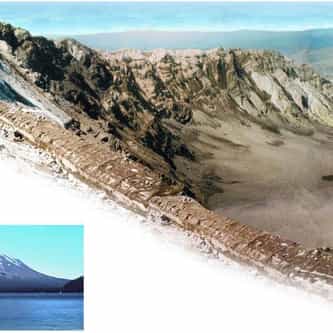 In 1980, a major volcanic eruption occurred at Mount St. Helens, a volcano located in the state of Washington, United States. The eruption was the only significant one to occur in the contiguous 48 U.S. states since the 1915 eruption of Lassen Peak in California. The eruption was preceded by a two-month series of earthquakes and steam-venting episodes, caused by an injection of magma at shallow depth below the volcano that created a huge bulge and a fracture system on the mountain's north ... more on Wikipedia

89.7k readers The Photographer Who Died Protecting The Closest Photos Of The Mt. St. Helens Eruption

46.3k readers The Eruption of Mount St. Helens Was More Powerful Than A Nuclear Bomb