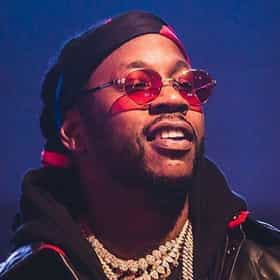 Tauheed Epps (born September 12, 1977), known professionally as 2 Chainz (formerly Tity Boi), is an American rapper. Born and raised in College Park, Georgia, he initially gained recognition for being one-half of the Southern hip hop duo Playaz Circle, alongside his longtime friend and fellow rapper Earl "Dolla Boy" Conyers. They are perhaps best known for being signed to fellow Georgia-based rapper Ludacris' Disturbing tha Peace label, as well as their debut single "Duffle Bag Boy". In February 2012, Epps signed a solo record deal with Def Jam Recordings, an imprint of Universal Music Group. The following August, he released his debut studio album Based on a T.R.U. ... more on Wikipedia

Gucci Mane
Here Are The Most Outrageously Expensive Things 2 Chainz Experiences On His Wild Viceland Show 968 votes On Viceland's Most Expensivest, rapper 2 Chainz samples hilarious and outrageously expensive stuff, and if you haven't been ...
The Best Songs Ft. 2 Chainz 518 votes These are the best songs featuring 2 Chainz. As a solo artist, 2 Chainz has won awards (Grammy Award for Best Rap Performanc...
The Best 2 Chainz Albums, Ranked 102 votes For decades 2 Chainz has been influencing the rap scene as rapper, songwriter, activist and as the CEO of his own independen...
The Best 2 Chainz Songs 263 votes List of the top 2 Chainz songs, as voted on by fans like you. This poll includes all 2 Chainz hits, but true fans know there...
The Best Songs on 2 Chainz's Album 'Rap or Go to the League' 423 votes If you listened to the new 2 Chainz album, make your Rap or Go to the League review by ranking all the songs from best to wo...