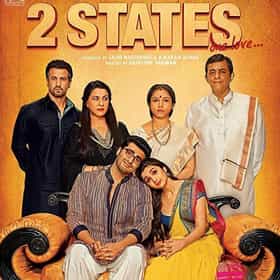 2 States is a 2014 romance film written by Chetan Bhagat and Sreerag Nambiar and directed by Abhishek Varman. 2 States is a 2014 romantic comedy film directed by Abhishek Verman based on the 2009 novel of the same name written by Chetan Bhagat. It is produced by Karan Johar and Sajid Nadiadwala . The film stars Arjun Kapoor and Alia Bhatt in lead roles. The film released on April 18, 2014 and earned mixed reviews from critics and has been received exceptionally well by audiences. ... more on Wikipedia

#19 of 271 The Best Bollywood Movies on Netflix 23.7k VOTES What other kind of films, regardless of genre, stop everything just to have an enormous dance number right in the middle of ...
#38 of 46 The Best Hindi Comedy Movies of All Time 18.3k VOTES For the Indian film lovers out there, here is a list of the best Hindi comedies of all time, ranked by your votes. Created i...