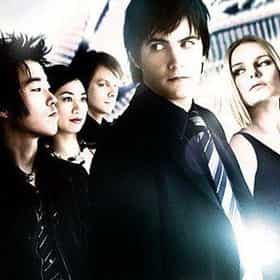 21 is a 2008 American drama film directed by Robert Luketic and stars Jim Sturgess, Kevin Spacey, Laurence Fishburne, Kate Bosworth, Liza Lapira, Jacob Pitts, and Aaron Yoo. The film is inspired by the true story of the MIT Blackjack Team as told in Bringing Down the House, the best-selling book by Ben Mezrich. Despite its largely mixed reviews and controversy over the film's casting choices, 21 was a box office success, and was the number one film in the United States and Canada during its first and second weekends of release. ... more on Wikipedia

#44 of 53 The Best Movies "Loosely" Based on True Stories 6.9k VOTES "Based on a true story" isn't always exactly accurate. This list of movies loosely based on true stories took a fe...
#23 of 120 People who voted for 21... People in the Northeast are 3x more likely to vote for this The Best College Movies Ever 18.4k VOTES Any true college student should watch each of these college movies at least once. However we recommend watching each movie s...
#43 of 55 The Best Movies Ever to Come Out in March 4.1k VOTES March is usually a dumping ground for movies that are neither summer blockbusters nor award contenders, but Marches of years...
#15 of 42 The Greatest Movies About Making Money 9.4k VOTES Whether they are about gambling, business, or planning a good heist, making money movies have made millions for Hollywood. T...
#2 of 14 These Movies Based On True Stories Totally Changed The Real Peoples' Race 709 VOTES Whitewashing in film isn't anything new. In 1921, Italian-American Rudolph Valentino played an Arab in The Sh...
#5 of 21 The Best Mathematics Movies 1.3k VOTES A list of the best mathematics movies ever made, ranked by movie fans with film trailers when available. This mathematics mo...
#4 of 38 The Best Movies About Gambling 1k VOTES Some of the most glamorous, flashy films of all time are about gambling. Las Vegas, Atlantic City, the thrill of taking a hu...
#10 of 45 The Best Las Vegas Movies 3.8k VOTES Bedazzled showgirls, famous casinos, alcohol, desert, spectacular night lights, and elaborate hotels... What are the best mo...
#17 of 56 The Best Kevin Spacey Movies 3.7k VOTES Kevin Spacey is one of America's favorite actors, both on the big screen and on the Netflix political drama House of Cards, ...
#3 of 24 The Best Kate Bosworth Movies 277 VOTES List of the best Kate Bosworth movies, ranked best to worst with movie trailers when available. Kate Bosworth's highest gros...
#38 of 199 The Best PG-13 Film Adaptation Movies 983 VOTES List of PG-13 film adaptations, ranked from best to worst with movie trailers when available. This list takes the best PG-13...