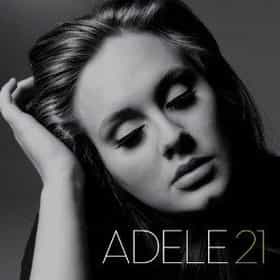 21 is the second studio album by English recording artist Adele. Released on 24 January 2011 in most of Europe, and on 22 February 2011 in North America, it was named after the age of the singer during its production. The album shares the folk and Motown soul influences of her 2008 debut album 19, but was further inspired by the American country and Southern blues music to which she had been exposed during her 2008–2009 North American tour An Evening with Adele. Composed in the aftermath of the singer's separation from her partner, the album typifies the near dormant tradition of the confessional singer-songwriter in its exploration of heartbreak, self-examination, and forgiveness. ... more on Wikipedia

#847 of 1,254 The Best Albums of the 2000s 99.9k VOTES List of the best albums of the 2000s decade, voted on and ranked by fans and critics. This list includes the greatest albums...
#48 of 120 What Are the Best Diamond Certified Albums of All Time? 23.8k VOTES Whether you call them Diamond certified or the best-selling albums of all time, this list features every album certified by ...
#16 of 55 The Most Underrated Album of the Year Grammy Winners 12k VOTES Since 1959, only one album from each year can claim that it was bestowed with Album of the Year honors by the Grammys. While...
#2 of 120 People who voted for 21... People under 30 are 3x more likely to vote for this also upvote Harry Potter Franchise on The Best Teen Movies of All Time The Best Albums of 2011 10.5k VOTES Be it by digital download or old-fashioned CD, most of us have purchased one musical album or another during 2011, but which...
#1 of 3 The Best Adele Albums, Ranked 172 VOTES We're ranking the best Adele albums of all time. One of the best English pop singers ever, Adele's discography fea...